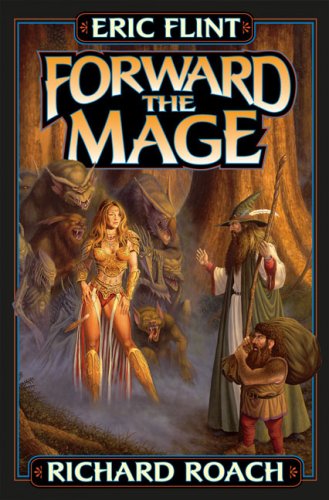 While not as dazzling as Flint's (2001), this prequel from the creators of the Joe's World series affords much the same kind of comic pleasure. The swashbuckling artist Benvenuti Sfondrati-Piccolomini arrives in the land of Grotum, hoping for royal patronage. Unfortunately, thanks to sorcerous machinations, the King of Goimr's wits have fled—and so has Zulkeh, the sorcerer who holds the key to getting the king and his wits back in time to prevent an Ozarine invasion. With two trusty companions—the gorgeous Gwendolyn Greyboar, sister to the strangler and militant revolutionary for the liberation of the dwarfs (and whose scantily clad body on the cover is far more eye-catching than the fully clothed mage or dwarf), and the deceptively affable giant, Wolfgang—Benvenuti sets out on a quest to save the king's mental health. Along the way, they enjoy a fair amount of first-class sex and encounter a variety of obstacles that seem chosen more for zaniness than for plausibility. Readers of the earlier novel will be on firmer ground than newcomers, at least to the point of being better prepared for the intensity of the satire and the rather episodic narrative technique. The descriptions in 18th-century prose at the head of each chapter may be a barrier for some, but they do nicely set the tone for the goofiness to follow. Best of all perhaps, this is one humorous fantasy that does rely heavily on puns.

The Tide of Victory