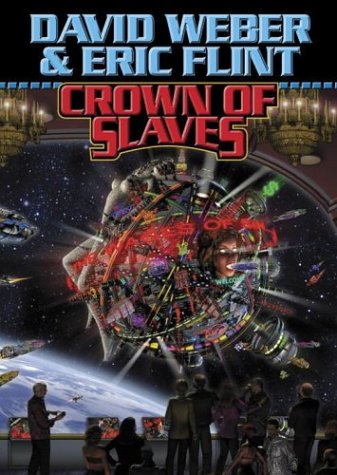 Fans of Weber's Honor Harrington series know that one of its more intriguing aspects is the "Honorverse," the historical, political and astrophysical foundation upon which he builds his plots. They will be delighted with this offshoot in which he and coauthor Flint () develop several situations and characters from other stories. Due to the incompetence of Queen Elizabeth's current government, the alliance between the Star Kingdom of Manticore and Erewhon is on the verge of dissolution, so the queen sends her niece, Ruth, as a representative to a state funeral to patch things up. When a band of terrorists attack Ruth, Havenite agent Victor Cachat seizes the opportunity to forge new bonds between the Erewhonese and his own star nation. At the same time, Cachat liberates an interstellar slave ship and, in a Machiavellian scheme, puts together an alliance that includes Manticorans, Havenites, Erewhonese and units of the Solarian League Navy to liberate a slave planet and form a new star nation dedicated to the extirpation of slavery. Despite the authors' opposing political views, they have managed, in a rare and impressive display of bipartisanism, to blend Edmund Burke and Carlos Marighella into an intriguing synthesis that should appeal to readers of both persuasions. This outstanding effort transcends the label "space opera" and truly is a novel of ideas.