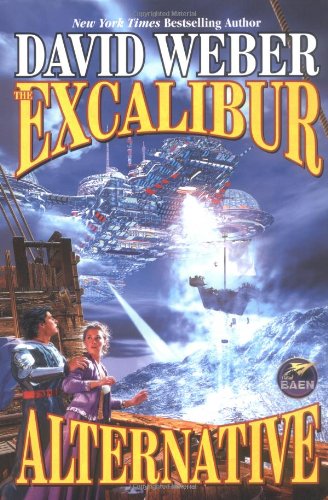 In the latest SF adventure novel from the creator of Honor Harrington, Weber (; ; etc.) expands a short story, "Sir George and the Dragon," which appeared in the David Drake anthology (2001), to good effect. The novel adheres to the story's basic plot: aliens of the Federation abduct 14th-century Englishmen to serve as mercenaries on planets where only low-tech weaponry is legal. But the author extends these events in several directions, with his usual mixture of apt characterization and historical sophistication (here regarding medieval weaponry and tactics). The Englishmen liberate themselves with the aid of the "dragon-men" (the Ternaui) and "Computer" (renamed Merlin), as well as the obstinate stupidity of their opponents. The narrative then leaps ahead several centuries to an ending that surprises both humans and aliens as they learn of the Empire of Avalon. The slam-bang action leaves little room for developing subplots beyond tantalizing hints, though this approach also means a streamlined story, in contrast to Weber's normally rather sprawling narratives. Newcomers to the author's work will do fine without having read previous books in the series. This novel makes an honorable companion to the late Poul Anderson's classic , which uses a similar plot idea.