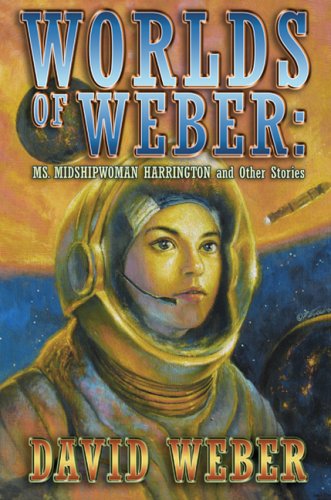 Worlds of Weber: Ms. Midshipwoman Harrington and Other Stories

This hefty and moving reprint collection of nine novellas written between 1995 and 2007 fills in the corners of Weber's celebrated Honor Harrington series (most recently 2005's ) and offers several other variations on political and military themes. In the title story, 20-year-old Honor joins the crew of , bound for interstellar antipiracy duty as the Royal Manticoran Navy builds up for confrontation with the People's Republic. “The Captain from Kirkbean,” a rousing alternate naval-history yarn, and “Sword Brother,” wherein U.S. Marines are pulled into a parallel universe's sword-and-sorcery battlefield, focus on the responsibilities and price of leadership and the necessity of cooperation despite intrinsic differences. “Miles to Go” observes interstellar conflict and politics from the unusual perspective of a war robot that learns human compassion. With restraint and good taste, Weber tempers his mourning for war's destruction with heartfelt celebrations of the honorable men, women, creatures and machines of the armed forces.