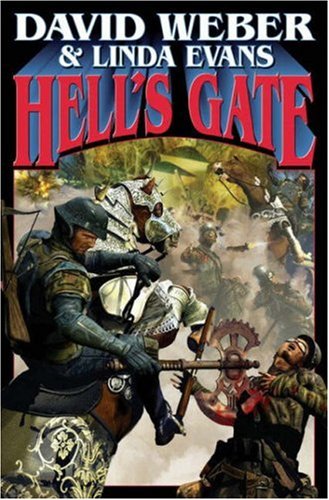 Magic and high tech collide in this exciting military SF novel from bestseller Weber ( ) and Evans ( ), the first of a new series. Two human societies, the Sharona and the Union of Arcana, have evolved in parallel universes without encountering another civilization, human or otherwise. The Sharona exhibit a level of technology roughly analogous to the late 19th century, with psionic abilities thrown in for seasoning, but the Arcana have harnessed magical energies down to the consumer level. Astonishingly, it's the magical society that suffers the greater shock when one of their companies encounters a small Sharona civilian survey team and is almost annihilated by the enemy's repeating firearms. The authors treat both societies sympathetically and realistically, with human vices and virtues evenly distributed. The narrative bogs down slightly under the weight of the world building necessary for later installments, but is uncompromising in sacrificing even strong, sympathetic characters to the demands of the plot.