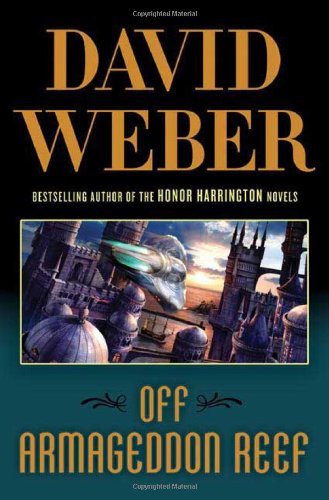 Weber ( ) launches an epic series with this gripping far-future saga, which springboards off the near-destruction of humanity in a massive war with the alien Gbaba. The survivors of the human race retreat to the planet Safehold, where they sacrifice basic human rights—and an accurate memory of the Gbaba—for the preservation of the species. The colony's founders psychologically program the colonists to prevent the re-emergence of scientific inquiry, higher mathematics or advanced technology, which the Gbaba would detect and destroy. Centuries later, cultural stagnation on this feudal but thriving planet is enforced by the all-powerful Church of God Awaiting. But one kingdom—with the aid of the war's last survivor, a cybernetic avatar that awakens to reinvent itself as a man named Merlin Athrawes—risks committing the ultimate heresy. Shifting effortlessly between battles among warp-speed starships and among oar-powered galleys, Weber brings the political maneuvering, past and future technologies, and vigorous protagonists together for a cohesive, engrossing whole.