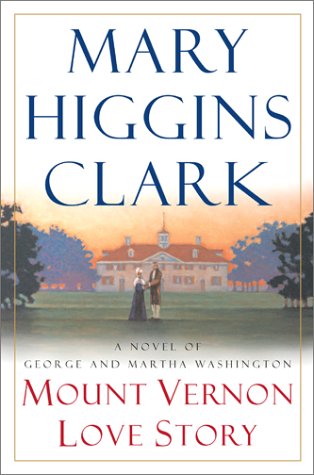 Originally published in 1969 under the title , this slim, muted historical romance is the long-out-of-print debut by America's reigning queen of suspense. As the quasi-biographical novel opens, George Washington is preparing to attend the inauguration of his successor, John Adams; Clark, employing inelegant but efficient transitional techniques (Adams's "rather flat nasal voice seemed to become more clipped and sharp-toned.... It became his mother's voice"), quickly moves the narrative back to George's boyhood. The temporal seesaw continues as she juxtaposes George's trials (his mean mother, his unrequited love for a friend's wife) and triumphs (his land acquisitions, his bravery in battle) with his reflections on the state of the union in the novel's 1797 present. But her focus remains on the domestic (a French and Indian ambush at the Monongahela River in 1755 is rendered with far less care and credibility than scenes of George's skill on the dance floor) and the emotional (George's "mantle of leadership" concerns him much less than the naughtiness of his stepson). What passes for a driving narrative force is George's slow transfer of affection from the beautiful, charismatic Sally Carey to the small, "pretty widow" Martha (known as Patsy) Custis he married, and then the growing bond between "my old man" and "my dearest Patsy." Though it can be argued that Clark's tale is neither sufficiently historical nor romantic—and it's definitely "not a suspense story," as Clark allows in a brief prefatory note—this is a light read that completists will devour, and that Clark's other fans may appreciate simply because it's a different bill of fare.