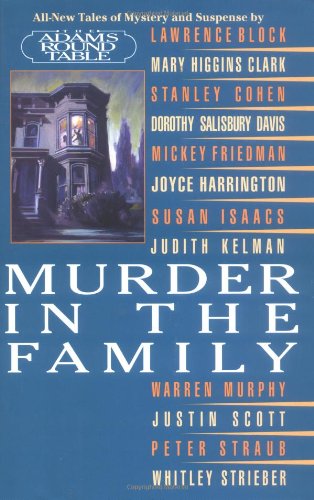 MURDER IN THE FAMILY

Despite the presence of such well-known mystery and suspense names as Lawrence Block, Mary Higgins Clark and Susan Isaacs, this uneven anthology of a dozen stories gathered loosely under the rubric of "family" is largely disappointing. Block's "A Moment of Wrong Thinking" (seemingly a Matt Scudder tale though the character isn't named) lacks the bite of most of his short fiction. Clark's "The Funniest Thing Has Been Happening Lately" is nicely written but the plot borders on the obvious. Joyce Harrington's "In the Merry Month of Mayhem" rambles for much too long. Peter Straub's strange story, "Ronald, D———!," transmogrifies a familiar fictional family of cartoon ducks into humanoid counterparts, while Justin Scott's animal tale, "Cat in Love," features a feline fatale, a mink and a terrier among its murderous suspects. Among the more successful stories are Stanley Cohen's take on a Samaritan and a prostitute, "A Girl Named Charlie," and Susan Isaacs's amusing tangle of two families, one business and a murder, "My Cousin Rachel's Uncle Murray." Warren Murphy manages a clever twist on a frustrated son's care of his elderly mother in "Motherly Love." A stronger editorial hand—no editor is credited—might have helped, but fans whose expectations aren't too high should welcome favorite authors as well as the chance to sample new ones.