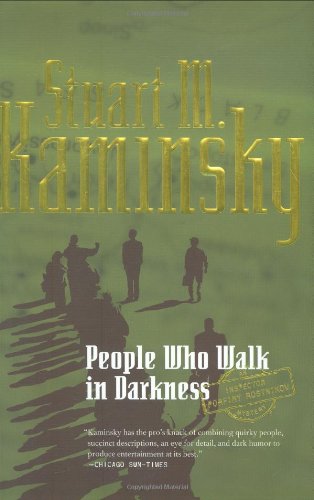 People Who Walk in Darkness

While Chief Insp. Porfiry Petrovich Rostnikov isn't as well developed a character as, say, Martin Cruz Smith's Arkady Renko, he's still one of the better contemporary examples of an honest policeman navigating the shoals of a corrupt society, as shown in the strong 15th Rostnikov novel from MWA Grand Master Kaminsky (after 2001's ). As maneuvering within the Moscow police force threatens the survival of Rostnikov's department, the Office of Special Investigations, his boss, Igor “the Yak” Yaklovev, orders him to look into the possible murder of Luc O'Neil, a Canadian geologist who died in a Siberian diamond mine rumored to be haunted by ghosts. O'Neil's death may be part of a series, which includes the torture-murders of two black South Africans found in a Moscow cemetery. The particularly high stakes make this one of Rostnikov's more exciting investigations. Hopefully, fans won't have to wait as long for his next outing.