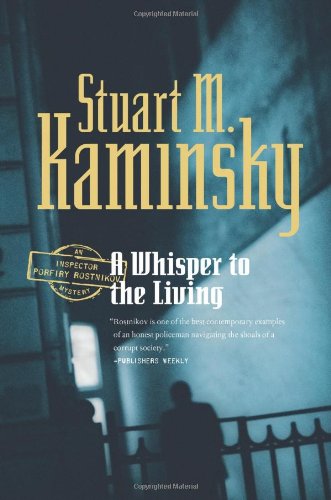 A Whisper to the Living

In MWA Grand Master Kaminsky's so-so 16th Porfiry Rostnikov novel (after 2008's ), the chief inspector of Russia's Office of Special Investigations pursues a serial killer, the Bitsevsky Maniac, named for the Moscow park in whose vicinity many of his elderly victims have been found bludgeoned to death with a hammer. Rostnikov stakes out the park in the hopes of attracting the killer's attention. Meanwhile, the chief inspector's colleagues, who include Rostnikov's son, Iosef, deal with unrelated crimes, such as tracking down a boxing champion who's suspected of murdering his wife and his sparring partner. These subplots, combined with an early reveal of the maniac's identity, lessen the suspense. In addition, Rostnikov is a lot less complex character than another Russian cop trying to maintain his honesty in a corrupt society, Martin Cruz Smith's Arkady Renko. Sadly, the prolific Kaminsky died October 9, 2009.