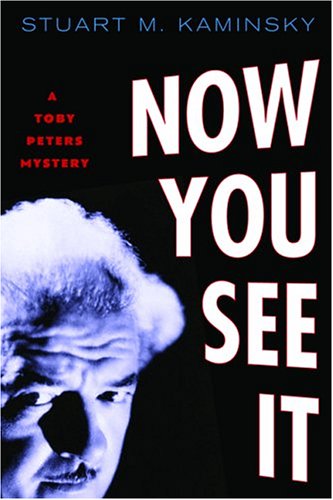 NOW YOU SEE IT: A Toby Peters Mystery

When PI Toby Peters answers the bell for the 24th time, his footwork is as nimble as ever, even if the dance will be familiar to fans of Kaminsky's Hollywood historical series. The celebrity-friendly detective has aided every kind of star from Errol Flynn in the first book ( ) to Joan Crawford in the most recent ( ). Toby often earns gratitude, frequently reaps scars and bruises, but never garners the kind of riches likely to change his boarding-house lifestyle. As WWII appears headed for a close, the great magician Harry Blackstone, who's been challenged and (apparently) threatened by a third-rate competitor, approaches Toby. Now teamed up with his brother, Phil, Toby undertakes to protect and unmask Blackstone's nemesis. Kaminsky makes an art of interjecting bits and pieces of period color, from Toby's dilapidated Crosley auto to 1940s songs or jingles. The running madcap humor includes landlady Irene Plaut's endless memoirs and dentist Shelly Minck's wacky inventions. Murder transforms Blackstone from magician to suspect and leaves him holding the bag, with predictably enjoyable results. Intriguing but simple magic tricks borrowed from radio show serve as clever chapter lead-ins.