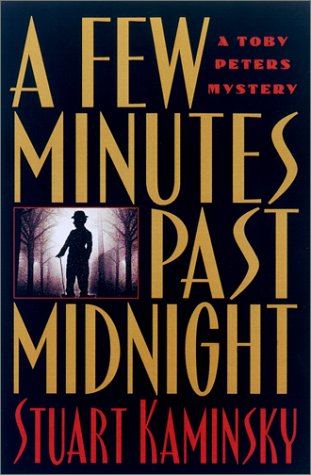 A FEW MINUTES PAST MIDNIGHT: A Toby Peters Mystery

It's a mystery how a rumpled, unprepossessing sort of private eye like Toby Peters has lasted long enough to save the hides of Hollywood stars such as the Marx Brothers and Bette Davis, literary luminaries William Faulkner and Dashiell Hammett and even political powerhouse Eleanor Roosevelt. Nonetheless, the intrepid sleuth returns for a 21st outing, his first since 1997's . It's 1943, and a beleaguered Charlie Chaplin is in need of Peters's services. A strange man has threatened Chaplin, whose latest movie project, about a serial killer who woos, marries and murders older women, seems to have offended a real-life counterpart. A familiar supporting cast is on hand to aid Peters: massive Jeremy Butler, ex-wrestler–turned-poet; Sheldon Minck, inept dentist and inventor; and Gunther Wherthman, suave, multilingual little person. With broad humor more likely to invite smiles than laughs and a substantial framework of nostalgia (Kaminsky doesn't just throw names around, he really evokes the era), Peters and friends pursue a crafty killer. Older readers will enjoy references that may be obscure to younger ones. For example, Peters drives a Crosley that "runs on washing machine and refrigerator parts," a reference to the defunct Crosley Co. that manufactured radios, refrigerators and appliances as well as cars. In sum, the author's facile competence has produced an amusing story full of suitable heroics.