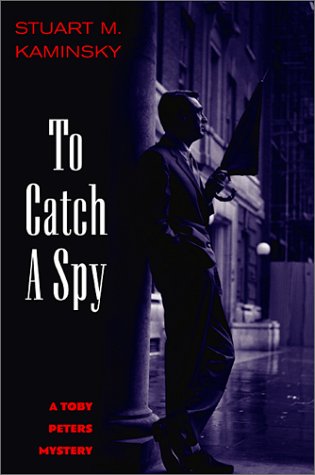 TO CATCH A SPY: A Toby Peters Mystery

For anyone with a taste for old Hollywood B-movie mysteries, Edgar winner Kaminsky offers plenty of nostalgic fun in his 22nd book to feature good-natured, unprepossessing sleuth Toby Peters (after 2001's ). Having solved cases for the likes of Bette Davis, Humphrey Bogart and the Marx Brothers, Toby now takes on as a client Bristol's own Archibald Alexander Leach, aka Cary Grant. A note at the start explains that King George VI awarded Grant a medal in 1947 for somewhat vague services during WWII. Kaminsky supposes Grant to have been a British intelligence agent, his job to detect the activities of Nazi sympathizers in Hollywood. Married to Woolworth heiress Barbara Hutton at the time, he finds more pro-Nazis among his wife's rich friends than among the acting community. Grant hires Toby, who packs a .38 with which he's unable to hit the broad side of a sound stage, to deliver a satchel of money in the dark of night to a man who'll give him an envelope in return. Need anyone ask what occurs? Shots ring out. The man Toby is to meet dies with the name "George Hall" on his lips, while Toby receives the first of many conks on the head, knocking him cold. Toby and the acrobatic Grant at his lithe best make an appealing team. The tone is light, the pace brisk, the tongue firmly in cheek. The series may be tissue thin by this point, but fans are in for a merry ride.

Murder on the Trans-Siberian Express Retribution