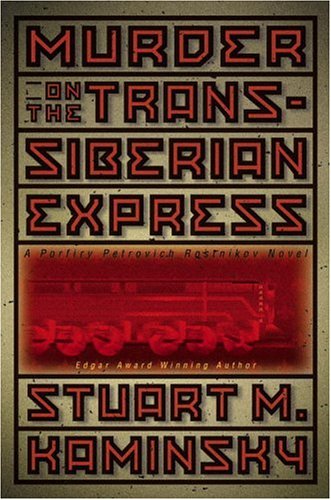 MURDER ON THE TRANS-SIBERIAN EXPRESS: A Porfiry Petrovich Rostnikov Novel

Edgar-winner Kaminsky's 14th Rostnikov novel (after 2000's ), about the imperturbable one-legged Russian policeman, weightlifter, plumber and family man, lacks narrative force due to its episodic structure. But while it may not be one of the author's best, his cast of oddball characters and view of post-Soviet Russia continue to fascinate. Chief Inspector Porfiry Petrovich Rostnikov, now working for Moscow's Office of Special Investigation and reporting to its director, Igor Yaklovev, gets assigned with one of his men to ride the 6,000-mile Trans-Siberian Express to intercept a courier exchanging money for a package somewhere along the route. Yaklovev believes the package contains a 100-year-old secret document belonging to Czar Nicholas II; Rostnikov follows orders, though he knows there's much his boss hasn't told him. Meanwhile, detectives Iosef Rostnikov, the chief inspector's son, and Elena Timofeyeva lead the effort to locate a madwoman whose seemingly random knife attacks have injured or slain three men in four weeks at subway stops. And detectives Emil Karpo and Zelach pursue a kidnapped rock rebel called Naked Cossack, who happens to be the son of a powerful Jewish magnate. The result is a busy and entertaining trio of stories woven together with vignettes about the building of the Trans-Siberian railway.