10 Books That Puzzle the Reader

Echoing authors like Borges and Calvino, the plot of N.J. Campbell’s mind-bending debut novel, Found Audio, features multiple documents and strange layers, but at the center is lost manuscript that details the story of a man in search of a mythic city. As the reader is led further down the novel's rabbit hole, the story delivers intrigue and weighty ideas. Campbell picks 10 of his favorite books that delightfully puzzle the reader.

I once heard someone say that at the heart of every good story is a mystery, and I’ve spent a lot of time thinking about what that statement means. At face value, it’s ridiculous. There are romances, horror stories, westerns, fantasies, crime dramas, and a dozen other genres in addition to mysteries, but for the moment, let’s put those definitions aside and think about the problem a bit more abstractly. What’s a mystery? It’s a puzzle. And what’s a story? It’s a series of events that unravel in an interesting way. So, where do they intersect? Well, you need a puzzle to keep a story unraveling in an interesting way. If you know what’s going to happen, when, and why, then it’s probably not being told well, which is to say it lacks that puzzle—that mystery—that forms the heart of every good story. With that in mind, I’ve chosen ten books that continue to puzzle me in interesting ways. Now, many people might say that Sagan’s precocious novel of teenage love and angst is clearly a romance without any real mystery, but I say that within it are puzzles of infinite complexity. In the book, we follow Cecile, a girl of 17, to a villa on the French Riviera where she embarks on a journey of self-discovery. She learns about her father, his mistress, a young man named Cyril, her late mother’s friend Anne, and the complicated forces that motivate our desires. Cecile learns about the most delicate of human emotions, love, but her study of its shape and form is conflicted, arduous, and demanding. Her desire is capricious, and yet her fancy is somehow understandable—and in that delicate balance between pure caprice and reasoned desire is the book’s most powerful and motivating puzzle: how can one person want so many things at the same time, and why do we feel so uneasy with or without the things we want? This is not a simple case of requited or unrequited love, but a true mystery of human emotion.

2. Who Was Changed and Who Was Dead by Barbara Comyns

We all live in the midst of death, horror, tragedy, and decay, but few writers show us we do so in such vivid and ultimately human terms as Barbara Comyns. Clinical in its descriptions, Who Was Changed and Who Was Dead, puts on display the grotesque, comical, kind, and bizarre nature of our world in all of its enigmatic glory. For the reader interested in puzzling over how such disparate aspects coexist alongside one another, Comyns offers much to think about in her encompassing exploration of late nineteenth century village life. Kawabata was an author who often puzzled his contemporary readers and reviewers with stories that didn’t quite seem finished. His prose is textured, layered, and nuanced to such a degree that its intricacy seems to move naturally toward a vanishing point. That vanishing point, on the page, often looks like ellipses, pauses, and silences. If you’re the type of reader who likes the kind of puzzle that happens between the lines, there’s plenty to be found in this author’s silent, ineffable offerings. 4. The Incal by Alejandro Jodorowsky and Moebius

Jodorowsky and Moebius teamed up to create a fantastically bizarre and perplexing graphic novel. It is the story of John DiFool, a Class R detective. Beyond that, I’m not sure what else to tell you about the plot, besides the fact that it’s never quite what you expect and ever more mysterious with every page. What’s most fundamental to its myriad of puzzles, though, is that it simply wouldn’t work as movingly without both the story’s text and its surreal, esoteric visuals. Here, we have the puzzle of how something can be truly greater than the sum of its parts. 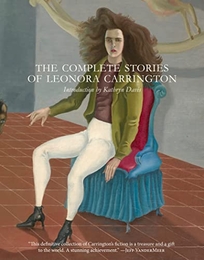 People say often enough that a spade is a spade, but I’d be more than curious to find out what the English-born, Mexican artist and surrealist writer Leonora Carrington would have to say about what a spade might be. For, in a Carrington story, a baby is not a baby, and a man is not a man. A baby might be a dog, and a man might be a fish, but that’s not to say that what’s happening doesn’t make sense, for it does. Her stories might not reflect the reality most people share, but as they tend to vaguely mirror events in her own life and speak to her personal difficulties with relating to the world as someone who was eventually labeled as insane and sent to an asylum, they reflect an alternate reality. That is to say they offer the reader the mystery of perspective and how things may not always be what they might seem to all people at all times. This is a book whose title includes a reference to a chocolate hazelnut spread. Nocilla is similar to Nutella. This title is puzzling in itself, but still less perplexing than trying to figure out what is or isn’t happening in this novel. For the reader who enjoys putting together tangential vignettes and circumstantial crossovers, this is the book for you. Ostensibly about a tree covered in shoes in the middle of the Nevada desert, it is an exploration of the puzzles that amount to our fragmented and variegated lives. 7. Thus Were Their Faces: Selected Stories by Silvina Ocampo

Failing all description, there are the mysterious writings of Silvina Ocampo. An Argentinian writer of arguably limitless imagination, I have yet to read a description of her work that characterizes it in any completely satisfying way. To say that it’s fantastical, cruel, mundane, psychological, supernatural, or avant-garde is to say both too little and also too much. It is ______, where ______ is beyond definition. To say anything else is to tell a lie, for she writes by her own rules, takes her own liberties, and gives her reader something that cannot really be described, but only experienced.

Maugham was a novelist of human psychology. He observed people in order to capture them in his fiction, and his output was prodigious. His observations spanned from the end of the 19th century to well into the middle of the twentieth, but it wasn’t until his last great novel that he came to a type of individual he couldn’t fully understand. Narrated from the perspective of a fictionalized Maugham, he follows Larry Darrell, an American pilot transformed by WWII, and a group of their mutual acquaintances. The narrator does a wonderful job of describing everyone’s lives in detail except for Darrell’s, as that character travels further and further into life’s fundamental mysteries. The book’s title is based on the Katha Upanishad, and Maugham does a good job of outlining some of the basic enigmas inherent in Larry Darrell’s pursuit of that particular type of mysticism. 9. A Single Man by Christopher Isherwood

Isherwood’s masterpiece illuminates the oldest of man’s intimate puzzles: the fleeting and vivid nature of our lives. A Single Man follows a day in the life of George, who recently lost his partner, Jim. We follow George through touching and poignant observations about his everyday world and enter the beauty of his existential reveries to a thrilling degree. For readers looking to wonder at the mysterious beauty inherent in life, there is much to think about, admire, and enjoy in this book.

Borges is an author whose international reputation was made, arguably, on only a few hundred pages of material. For a canon composed only of poetry, essays, and short stories, the force of his work is unparalleled for its brevity. A master of every form he attempted, a little of everything except his poetry is combined in this collection, though its most famous elements are his imaginative stories. With Borges, the puzzle is never some mystery of human experience, but the mystery of imagination itself. He is one of the only authors I know who presents truly fantastic puzzles of imagination: an infinite library, an encyclopedia of another world, and a book that doubles as a labyrinth itself. What could be more puzzling than that?