Lisa Halliday's stellar and inventive debut novel, Asymmetry, is a puzzle of seemingly incongruous pieces that, in the end, fit together perfectly. In the early aughts, young NYC book editor Alice embarks on an affair with Ezra, a surprisingly kind older novelist; the second, decidedly different section follows Amar, an Iraqi-American of complicated provenance who has been detained at Heathrow Airport on his way to Iraq. The novel provides frequent delights and is a singular collision of forms, tones, and arguments. Halliday picks 10 novels about novelists.

The more you read, the more you realize how little you’ve read. Accordingly, this is not a list of the ten “best” novels about novelists, as I wouldn’t want to give an impression of being better-read than I am; instead, it’s a list of novels about novelists by writers appearing on my bookshelves at home in Milan—a library as incomplete and idiosyncratic as the next. Indeed, for all the female writers lining my living room, I could not identify more than two who’d written a novel about a novelist (Louise Erdrich may be a third, though it’s never specified whether Riel America’s master’s thesis is fiction or non-fiction, so I resisted including Shadow Tag here). Nor do I seem to own any novels about novelists by writers of other demographics underrepresented below, a shortage one aspires to fill with new revelations and recommendations. I suppose it could be said that every novel is, to an extent, about a novelist, in that a novel is a kind of index of the novelist’s consciousness; who else could it be more about? Yet even a literal approach to the assignment yields plenty to ponder, not least what inspires a novelist to turn the mirror on her own vocation: one is encouraged to write what one knows. Or maybe one writes about being a novelist to arouse sympathy—to plead it isn’t the enviable métier it would seem. A novelist-narrator is an excuse to be as linguistically extravagant or experimental as one likes, in the service of characterization. And then we have what might be the most seductive motive for writing a novel about a novelist: the opportunity it presents to comment on the nature of fiction itself.

And so to the books, listed here in the same order they appear on my shelves: 1. Little Women by Louisa May Alcott

Alphabetically first and naturally the book I read long before any of the others listed here, Little Women was also my introduction to metafiction, in that the novelist-character in question may be the author of some of the novel we hold in our hands. The book is also practically instructive, in that young Jo displays a healthy levelheadedness regarding the public reaction to her first book: “I’ve got the joke on my side, after all; for the parts that were taken straight out of real life are denounced as impossible and absurd, and the scenes that I made up out of my own silly head are pronounced ‘charmingly natural, tender, and true.’” 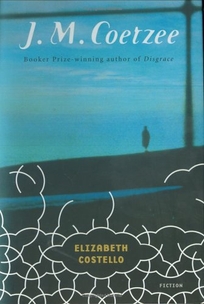 An aging Australian novelist famous for a masterwork published decades earlier, Elizabeth Costello now wearily gives lectures on subjects including realism, animal rights, and “The Problem of Evil.” Accompanying her to an awards ceremony, her son regards her “as a seal, an old, tired, circus seal. One more time she must heave herself up on to the tub, one more time show that she can balance the ball on her nose.” He also recalls how “as far back as he can remember, his mother has secluded herself in the mornings to do her writing. No intrusions under any circumstances”—bringing to mind another intrusion, recounted by another novelist in a letter to his editor: “I’m sorry to bother you, Daddy,” Cheever once quoted his young son, who had “knocked lightly” on his study door, “but my cock is stuck in a zipper.” Though nominally about a senator’s wife and her affair with a CIA agent, Democracy’s real protagonist is the novelist Joan Didion, who annotates the action with commentary on the artistic process. “This is a hard story to tell,” concludes the first chapter. The second begins: “Call me the author. Let the reader be introduced to Joan Didion, upon whose character and doings much will depend of whatever interest these pages may have, as she sits at her writing table in her own room in her own house on Welbeck Street. So Trollope might begin this novel.” Novelists summoning novelists: In Down and Out in Paris and London, Orwell does something similarly invocatory when he writes, of a Parisian hotel: “Then the grand turmoil of the day started—the dinner hour. I wish I could be Zola for a little while, to describe that dinner hour.” 4. The Garden of Eden by Ernest Hemingway

This unfinished and posthumously published novel features American novelist David Bourne, honeymooning with his wife Catherine on the Côte d’Azur. Bourne contemplates resuming writing (“It would be good to work again but that would come soon enough as he well knew and he must remember to be unselfish about it”), while his wife, who he is right to imagine is jealous of his art, announces she has a surprise and returns to their hotel with her hair shorn short. “You see…I’m a girl. But now I’m a boy too and I can do anything and anything and anything.” And so in a sense Catherine becomes the novel’s novelist, the more determined forger of narrative and form; she may never actually put pen to paper, but from the moment her long hair is gone she seems to embody every woman who has ever commanded herself to “write like a man.” 6. The Tenants by Bernard Malamud

Harry Lesser, the last tenant in a condemned apartment building, refuses to leave before he’s finished a novel that he’s been writing for nearly ten years. His days are routine and his thoughts rarely stray from the task at hand: “I’ve got to get up to write, otherwise there’s no peace in me.” Returning one morning from buying groceries, he hears a telltale staccato from a neighboring apartment and discovers a man inside, typing “energetically with two thick fingers.” This is Willie Spearmint, who challenges Lesser to reconsider his assumptions about what constitutes fiction versus autobiography while also antagonizing him with his anti-Semitism and competitive ambition. Asked how his own book is coming along, Willie replies: “On four feet, man, in a gallop. ... I’m gon win the fuckn Noble Prize.” 7. Tropic of Capricorn by Henry Miller

In The Tenants we read how “subject and form were inseparable.” Miller’s aesthetically divergent novel upholds this idea with its expansive, voracious, exuberant style about a writer who does almost anything but write. “I had to learn, as I soon did, that one must give up everything and not do anything else but write, that one must write and write and write, even if everybody in the world advises you against it, even if nobody believes in you. Perhaps one does it just because nobody believes: perhaps the real secret lies in making people believe.” 8. The Ghost Writer by Philip Roth

The first of Philip Roth’s novels narrated by Nathan Zuckerman, The Ghost Writer also features established novelist E.I. Lonoff, whom young Zuckerman visits in the country during a snowstorm and stays the night. “…I was twenty-three, writing and publishing my first short stories, and like many a Bildungsroman hero before me, already contemplating my own massive Bildungsroman…” By Zuckerman Unbound, Zuckerman is suffering his fame for having written the Portnoy-like novel Carnovsky; ominously, the epigraph to the second Zuckerman book is a line spoken by Lonoff to his wife in the first: “Let Nathan see what it is to be lifted from obscurity. Let him not come hammering at our door to tell us that he wasn’t warned.” Technically a collection of short stories about the fictional novelist Henry Bech, this Everyman’s Library gem warrants bending the rules slightly for inclusion here. It concludes with the antic “Bech and the Bounty of Sweden,” in which the misanthropic, unprolific Bech improbably receives the Nobel Prize. His wife thrusts his baby daughter into his arms just as he’s preparing to write his acceptance speech, which duly proceeds: “I have asked my daughter to speak for me. She is ten months old….The topic we have worked out between us is, ‘The Nature of Human Existence.’ … ‘Hi!’ Golda pronounced with a bright distinctness instantly amplified into the depths of the beautiful, infinite hall. The she lifted her right hand, where all could see, and made the gentle clasping and unclasping motion that signifies bye-bye.” “Twenty-five years ago, when I was very young, I published a short novel on the impossibility of love. Since then, on account of a trauma I shall go into later, I had not written again, I stopped altogether, I became a Bartleby…” And so we conclude with a novel about a novelist who no longer wants to be a novelist. In the spirit of Melville’s “Bartleby, the Scrivener,” Bartleby & Co. consists almost entirely of “footnotes” about writers who at one time or another have suffered “Bartleby’s Syndrome”—i.e., writers who “would prefer not to.” These include Walser, Rimbaud, Musil, Salinger, Borges, Magris, Hofmannsthal, Leopardi, Zweig, Saramago, Tabucchi, Pynchon, Rosa Montero, and more. (By contrast, prolific Simenon, with his “senseless energy,” verges on “anti-Bartlebyan insolence.”) “The glory or the merit of certain men consists in writing well,” reads Jean de la Bruyère’s epigraph, “that of others consists in not writing.” On the other hand, as Kafka is also quoted: “A writer who does not write is a monster who invites madness.”