In Cannonball, Kelsey Wroten skillfully explores youth, ego, and the doomed pursuit of artistic purity in this story that follows Caroline Bertram, who's going nowhere fast: her hopes of being a professional fiction writer have stalled, her binge drinking is getting out of hand, and, despite flings and unrequited crushes, she’s still not over the girl who broke her heart in high school. Caroline becomes fixated on a pro wrestler named Cannonball; as Caroline feverishly completes her young adult fantasy novel, Wroten stylistically blends ethereal dream sequences starring Cannonball with scenes from Caroline’s novel. Wroten picks 10 of her favorite graphic novels and graphic memoirs about queer women.

When I read a graphic novel that includes a queer narrative there are a few things that make it stand out to me. I want characters that feel sincere, not typecast. In short, characters I can see some of myself in. In the realm of indie comics, representation has taken great strides. A lot of publishers have taken an initiative to highlight heretofore underrepresented stories of queer women. Here are a few I think you shouldn’t miss: Love and Rockets is a profound and complex series written and illustrated by Gilbert and Jaime Hernandez. The series is daunting to begin, but fear not, Fantagraphics has been kind enough to collect them into bite size chunks. Enter the collected Locas books by Jaime Hernandez. I would be at a loss to discuss what indie comics with queer characters are today without mentioning these books. The narrative revolves around a rich cast of Latin-American characters, all from a place called Hoppers outside of Los Angeles. The central focus is often on Margarita “Maggie” Chascarrillo and Esperanza “Hopey” Glass. They are sometimes girlfriends, sometimes estranged, but always each other's closest confidant when the chips are down. They are chosen family when their own families often leave much to be desired. There is a lot to parse through here since the series is still going on, but it is well worth it. A good place to start is Locas Book 1, Maggie the Mechanic, to get a taste for what you can expect. What begins as a slice-of-life narrative with a lot of fantasy, action, and adventure, slowly matures into realistic fiction about a group of friends and enemies you can’t help but feel are truly alive as you watch them age and grow through the years. Set in an all-girls Catholic high school in Toronto in 1993, Skim is the story of the eponymous character’s journey through her tumultuous junior year. She is a self-described outcast, Wiccan, and goth. When a popular girl named Katie Matthews’s boyfriend commits suicide, the entire school goes into mourning and becomes hypervigilant to “depressives“ (read: goths) leaving Skim in the crosshairs of a suicide prevention club that doesn’t even attempt to understand her. The story is at once sardonic and tragic. Skim’s relationships with her best friend, her parents, and her understanding of her sexuality are simultaneously in turmoil. While Katie Matthews’s grief is put on display without her permission, Skim’s private and even unspeakable grief over a complicated relationship with her female English teacher is kept secret. The two mourning girls find each other despite the chaos of the grief circus. The crux of Skim is loss, yes, but also growth. Mariko Tamaki’s writing is emotionally poignant, and Jillian Tamaki’s illustrations are mind-blowingly gorgeous. 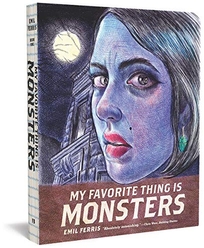 3. My Favorite Thing Is Monsters by Emil Ferris

My Favorite Thing Is Monsters follows the story of a young girl named Karen Reyes living in 1960s Chicago. Karen is obsessed with horror comics and “creep shows.” The story is told through her notebook, where she depicts herself as a wolfman. The plot of the first volume is very complex and beautifully constructed. Ferris tackles the Kennedy and King assassinations and their aftermath in the lives of the diverse people in Karen’s neighborhood. Karen is also an amateur detective, looking for obscure clues in paintings and tapes to discover the truth about the death of her neighbor and Holocaust survivor, Anka Silverberg. Horror, as a genre, has been described by many as inherently queer. This is especially true of the monster, beings that do not conform to the norms of society. Karen sees herself as different, singled out and persecuted by the M.O.B. (Mean, Ordinary & Boring) but her greatest fear is not being seen as a monster, but becoming one of the normal people. When she begins to have feelings for her best friend Missy (who sees herself as Count Dracula) she momentarily finds peace in the bleak reality Ferris depicts. The illustration in this book is unlike anything I’ve ever seen. Drawn completely in Bic pen on notebook paper over the course of several years while Ferris was in recovery from the West Nile virus, the book is nothing short of an opus. 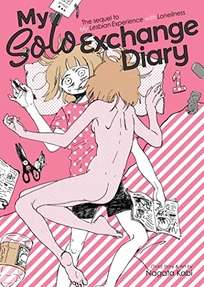 This book is the follow up to the popular My Lesbian Experience With Loneliness that came out in 2016. The autobiographical story continues to follow the events of Nagata’s life. One of the things I find most striking about this series is the author’s ability to examine her emotional state and relay it in a way that is not falsely positive or dishonest. She is not afraid to explore darker or more embarrassing emotions, and as you can tell by many of the selections in this list, that is something, in my view, that makes a work great. Sometimes dark moods feel like a sort of enchanted mist that leave you an amnesiac once you exit them, but not so for Nagata. Like its predecessor, this book gets heavy but is ultimately a rope-a-dope into Nagata’s unrelenting optimism. 5. As the Crow Flies by Melanie Gillman

Charlie is a queer African-American teen at an all-white Christian summer camp that she feels compelled to attend by a higher power that comes to her in the form of feathers from the sky. The plot revolves around a hiking trip to a mountaintop that proves to be very uncool and problematic for both Charlie and a transgender camper named Sydney. They soon find their camaraderie over the crappiness of the situation, budding into romance. Charlie’s communication with God throughout the story is something I found very special. Gillman looks at the cross-section of Christianity, youth, queerness, race, and feminism and takes us on a bittersweet and sometimes agonizing journey through it. 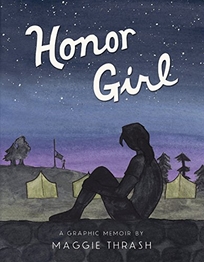 Honor Girl also takes place at a summer camp in the South. Maggie is 15 and the year is 2000. She’s obsessed with boy bands, getting her DE certification and, most notably, a female camp counselor named Erin. Her feelings about Erin are refreshingly well observed by Thrash. Thrash recognizes and beautifully conveys the convergence of subtlety and power that go along with experiencing a gay crush for the first time. At once it’s so ethereal you feel if you talk about it it’ll disappear, especially at this conservative camp, but it also is the very axis of your emotional world. 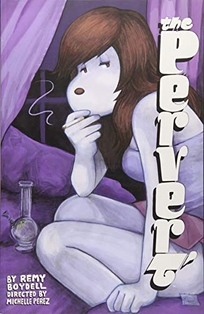 7. The Pervert by Michelle Perez, illustrated by Remy Boydell

The Pervert is a brutally honest work that details the desperation and elation experienced by Felina, a trans woman and sex worker in Seattle. Perez delivers the narrative with a dose of dark humor and sarcasm. However, Perez doesn’t hold back. The writer drew from her own experiences, leaving the work feeling raw and powerful. Boydell’s character design is purposefully childlike, using dogs and cats and characters like Clifford the Big Red Dog as stand ins to mask the trauma of some of the heartbreaking moments the book covers. The story also follows Felina’s romantic life and friendships. I was left with my jaw on the floor after reading this story and have since not read another like it. This book pulls no punches and I think that is not only extremely admirable but necessary. This is book three from Ariel Schrag’s autobiographical High School Comic Chronicles, written while Schrag was in high school and living in Berkeley, Calif., in the late '90s. It's hard to fathom that a 17 year old would be able to be this frank and articulate about exploring her life and all its messiness, but Schrag was. Her voice is irreverent, often brash and never shies away from self-immolation. In this book, she falls in love for the first time with a mercurial girl named Sally and records the tilt-a-whirl of joy and agony that often comes along with that. What I find fascinating is that this series is essentially a diary, so it’s written as it is happening rather than recreating the story from memory as a memoir might do. I first read this book shortly after my senior year of high school and it was one of the reasons I started drawing comics. Schrag’s direct, sometimes crude, style was very thrilling to me as a teenager who hadn’t had any artistic training. The other books in the series (Awkward, Definition, and Likewise) are also worth a look if this book appeals to you. 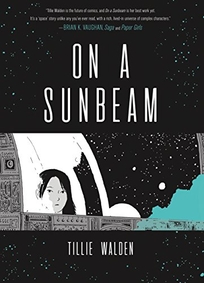 9. On a Sunbeam by Tillie Walden

Tillie Walden is a new and super young (only 22!) comics creator who is extremely prolific and has developed a unique style of storytelling that I think she can call her own. On a Sunbeam is a dramatic, cinemagraphic narrative that reminds me more of a Tarkovsky film than other comics I’ve read. The book is part love story, and part soft, metaphoric, science fiction. The galactic landscape Walden creates is surreal, sparse, and poetically beautiful. An interesting touch to this book: there are no men to be found, like at all. Walden creates robust comics where nothing is explicitly told, just understood, through body language and context. I admire her storytelling to no end. 10. Strangers in Paradise by Terry Moore

Katina “Katchoo” Choovanski is one of my favorite characters of all time. She is an action hero, a sex worker, an artist, an unrelenting romantic, and queer as hell. While Strangers in Paradise delves into superheros and crime drama, what stands out to me is the dedicated focus on the love triangle between Katchoo, her more-than-friends best friend Francine and their mutual friend David. The complexity of a situation where everyone loves each other but not all in the same way at the same time is hard to communicate succinctly. Thankfully, Moore takes something like 100 issues to explore it. The emotional situations can get heavy at times and slap-stick ridiculous at others. Greater still are moments that feel so real you might even find yourself experiencing an epiphany about your own life.