Vanishing Narrators: 10 Books in Which the Narrator Isn't the Main Character

Juliet Grames’s vivid and moving novel, The Seven of Eight Deaths of Stella Fortuna, follows its heroine from a childhood in the early 20th century in a tiny Calabrian mountain village to her family’s immigration to America when she is 19 and then through a long life including a marriage about which she has decidedly mixed feelings, many jobs, and even more children. The novel’s unnamed narrator, one of Stella’s granddaughters, reconstructs her life history with the help of Tina and other family members. Grames picks some of her favorite novels in which the narrator isn't the main character.

Many—maybe even most—of my favorite books are novels narrated by an observer who does not consider themselves the main actor in the story. Think Nick Carraway, Jay Gatsby’s sort-of friend, the perfect mournfully sardonic narrator for one of American literature’s most enduring novels. I love stories told by the supposedly innocent bystander; the less charismatic best friend; the hapless fan or scholar whose own life recedes in the shadow of their subject of adoration.

I especially love books like this because they are honest in two ways other narrative forms are often not. First, a non-protagonist narrator acknowledges the fact that storytelling is always, always about perspective. In the same way history is dictated by the victors, stories are dictated by the people with the ability and inclination to write them down, and the meta-fiction created by a self-aware narrator telling someone else’s story can be beautifully tense, disarmingly frank, and entertainingly specious. Second, the non-protagonist narrator acknowledges obsession—an obsession with another person that inspired the character to take the time to set down this story in writing at all. They seethe with charisma, jealousy, and longing of one form or another. This is why I chose this narrative form for my own novel, The Seven or Eight Deaths of Stella Fortuna.

I’m not the only one who loves to read this mode of storytelling; many of the traditional candidates for Great American Novel follow the format: besides The Great Gatsby, there is Robert Penn Warren’s All the King’s Men, in which reporter Jack Burden tells the story of politician Willie Stark; or John Knowles’s A Separate Peace, in which jealous introvert prep schooler Gene obsesses over his outgoing and talented roommate, Phineas. But the list of relevant masterpieces is long and absolutely need not adhere to the reading we did in high school back before “the canon” was including much besides white men. Here are a few of my favorites. 1. The Tale of Genji by Murasaki Shikibu

Let’s go ahead and go all the way back to the beginning, to what is argued to be the first-ever novel, composed around the year 1010 AD. The story is related by an unnamed female speaking to a social superior, as is evident in the form of verb conjugation used. It describes the love affairs and misadventures of Genji, a minor son of the Emperor. The identity of the narrator is never revealed, but some believe the text hints that she might be one of Genji’s (rather many) lovers. 2. The Name of the Rose by Umberto Eco

Detective fiction has a long tradition of an average Joe narrator who relates the adventures of a whimsical genius investigator—a tradition that goes all the way back to the mystery genre’s inception with Edgar Allan Poe’s Auguste Dupin stories and Arthur Conan Doyle’s Sherlock Holmes. With The Name of the Rose (1980), Eco offers a hyper-intellectual pastiche of that archetype with a murder mystery set in a 14th century Italian convent in which a bumbling Benedictine novice, Adso, describes the crime-solving antics of his master, a monk named William of Baskerville. This 1929 novel is narrated by Irene Redfield, a light-skinned black woman who learns a friend from her Chicago childhood, Clare Kendry, has been living as a white woman, married to a virulently racist white man and completely cut off from her roots. Irene’s obsession with Clare’s choice—and the light it sheds on her own choices—cause her to spin back into the woman’s orbit no matter how much she tells herself she’s done with Clare. 4. The Pursuit of Love by Nancy Mitford

The narrator of this 1945 novel is Fanny, an upper-class English girl who is abandoned by her parents to live with wealthy relatives. Fanny is relating the life and exploits of Linda Radlett, her cousin and best friend, whose love affairs and impetuous adventures wholly distract the reader from Fanny’s absence in her own story. This 1994 novel is the story of Sophie Caco, who is 12 years old when she emigrates from Haiti to join her mother in New York, but really it is the story of Sophie’s enigmatic mother, Martine, whose traumatic history inflicts itself not only on her relationship with Sophie but also, viscerally, on Sophie herself. 6. The Chosen by Chaim Potok

Set in the New York City Orthodox Jewish community at the end of World War II, this 1967 novel is narrated by Reuven, a Modern Orthodox boy from a Zionist family, who is deeply committed to and fascinated by his sometimes controversial friendship with Danny, the genius son of a Hassidic rabbi. 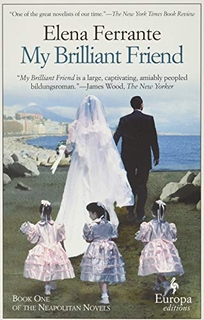 7. My Brilliant Friend by Elena Ferrante

Another favorite of mine that highlights the emotional intensity of a platonic friendship. In this 2012 novel, Elena, the narrator, builds her life around and in relief against her unpredictable and addictive best friend, Lila, a thwarted and moody genius who causes steadfast Elena to underestimate herself. Quentin Compson, the troubled Harvard student we saw commit suicide in The Sound and the Fury, narrates the life story of Thomas Sutpen, a larger-than-life slave-holding plantation owner from Quentin’s native Mississippi in this 1936 novel. The narrative framework, a conversation between Quentin and his roommate, incorporates historical fact and conjecture and highly personalized interpretation—one of my favorite allegories for the way it shows how history is preserved. 9. Snow Flower and the Secret Fan by Lisa See

This 2005 novel hits heavy on one of my favorite themes: remorse. Its 80-year-old narrator, Lily, reveals how the story of her own long life has been framed by that of her long-lost best friend, Snow Flower, and how she let her obsession with their friendship ruin both their lives. 10. The Prime of Miss Jean Brodie by Muriel Spark

A bit of a cheat selection, because the narrator of this 1961 novel is a third person omniscient, but it connects the reader to a group of six Scottish school girls who are all equally obsessed with their vivacious, unconventional, and fascist teacher, Miss Brodie, whom they adore, obey, and betray.