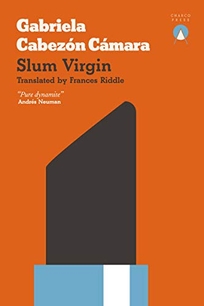 Cámara’s stunning tour de force (after the Booker International–shortlisted The Adventures of China Iron) follows Cleo, a trans ex-prostitute, known as the “transvestite saint” for her visions of Virgin Mary, through accounts from Quity, a down-and-out journalist hoping for redemption. Cleo’s visions expose the motivations of the rich, poor, police, media, thieves, and gangs in the brutal Argentinian slum of El Poso, where she lives. After Quity, a depressive atheist, meets Cleo, she receives a grant to write Cleo’s life story, and immerses herself in El Poso’s hardscrabble world. While driving through town high on cocaine, Quity discovers a young woman who’s just been tortured by local mobster The Beast, “a human flame running a kind of epileptic race,” and puts the woman out of her misery with her .38. The Beast’s later murder creates a power vacuum filled by politically connected El Jefe, who is set on selling the slum for development, minus its inhabitants. Meanwhile, Quity and Cleo become lovers, the Virgin inspires Cleo to write a cumbia opera, and the two plot their escape from El Poso. With humor and a frenetic pace, the propulsive narrative is roiled with fabulism, faith, existentialism, and concern for the rights of the impoverished, all tinged with bittersweet and poetic turns of phrase. Cámara’s breakout tale is mind-blowingly good. (June) 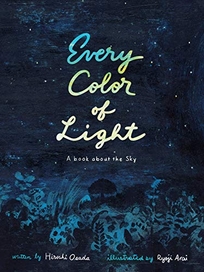 Every Color of Light

In a strong translation by Boyd, a Japanese team captures the magic of a summer rainstorm. Working in thick, dense strokes, Arai (What What What?) creates a lake surrounded by foliage whose colors range from spring green to spruce blue. Silver streaks show the first drops: “Look, it’s raining.” The rain falls harder (“Wetter/ And wetter”), and the greenery, the late poet Osada observes, changes: “The blues darken/ And so do the greens.” Wind whips, leaves fly, rain slashes sideways; bolts of lightning flash across the spreads amid sodden blossoms; and thunder follows, “Cracking/ Crashing.” After a few final flashes in the distance, the sky clears, and the storm is shown to have been ephemeral: “Look, no more rain.” The sun sets, dusk falls, the stars emerge (“Shining,/ They share their stories”). By employing landscapes in lieu of human or animal characters, Osada and Arai ask readers to look—really look—at the rain, the way the changing weather transforms the visible spectrum, and the magnificence of the night sky, phenomena all too often unseen in a hurry-up world. The result is a story that sharpens the senses and quiets the soul. Ages 4–up. (June) 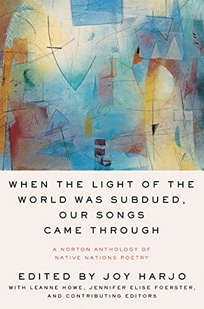 When the Light of the World Was Subdued, Our Songs Came Through

This comprehensive anthology presents the work of 161 Native American poets from nearly 100 indigenous nations and spanning from the 15th century to the present. Each section represents a different region of the United States and is introduced with information about the Nations that live there. The poetic styles and personal experiences are endlessly variable and consistently fresh. In “Shrinking Away,” Jim Northrup recalls his struggle with PTSD after serving in Vietnam: “Survived the war/ but was having trouble/ surviving the peace.” Samuel Sixkiller (1877–1958) attended the Carlisle Indian School, where he was class poet in 1895. His ode “To Class ’95” represents the tension of the school’s assimilationist project and the longing for home: “When shall the culture, the art and refinement/ Drive from our minds, roving thoughts of the past?/ Shall broad education, or savage confinement,/ Conquer the Red Man now fading so fast?” Tommy Pico and Natalie Diaz represent the newest generation, who honor those who came before while providing a look at life on the reservation today. Across centuries, regions, languages, and styles, this well-crafted anthology is perfect for Native American poetry courses and anyone looking to expand their knowledge of indigenous literature. (Aug) 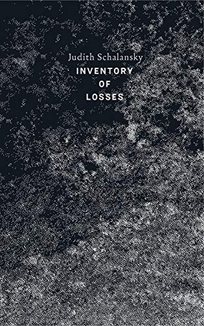 An Inventory of Losses

Schalansky’s inspired latest (after Atlas of Remote Islands) melds history, memoir, and fiction into something new and extraordinary: a museum of the extinct, the missing, and the forgotten. Chronicled in 12 short pieces, each based on a “lost” object—among them an early-20th-century film, fragments of Sappho’s poetry, destroyed Italian villas, demolished East German government buildings—the narratives are distinct, memorable, and, at their best, spellbinding. Some are highly researched, meticulously reconstructing historical places such as the the Villa Sacchetti at Castelfusano in Rome and figures such as 18th-century British explorer James Cook, who, in search of a then-mythical southern continent, “had ploughed the southern seas in huge, sweeping zigzags and discovered nothing but mountains of ice.” Other tales take on the flavor of impressionistic, contemporary memoirs, rooted in the narrative of a Schalansky-like writer-researcher as she explores the topic at hand. Still others have the feel of speculative fiction, so detailed in their histories that they feel like memories. In one, wild animals are brought to fight one another before the massive audiences of Rome; another follows the moments, both dramatic and mundane, of a day in the life of an East German couple. With this collection of illuminating meditations on fact and fiction, Schalansky cements her reputation as a peerless chronicler of the fabulous, the faraway, and the forgotten. (Aug.) 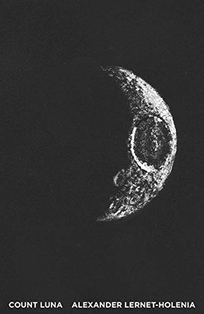 Austrian writer Lernet-Holenia (Mona Lisa, 1897–1976) addresses guilt over WWII in this masterly novel, originally published in 1955. Nearly a decade after the war, Alexander Jessiersky, the head of an Austrian transport business, travels to Rome, enters the catacomb beneath a church, and disappears. Lernet-Holenia then rewinds to the beginning of Jessiersky’s fateful journey. WWII has erupted, and his company’s board of directors encourages anti-Nazi Jessiersky to purchase a parcel of railroad-adjacent property from the reluctant Count Luna, an aristocratic heir. Jessiersky refuses, and the board, determined to satisfy wartime demand, has Luna shipped to a concentration camp for alleged anti-Germanness. Jessiersky sends care packages to Luna, and by war’s end, Luna is assumed dead. Years later, Jessiersky’s children claim to have seen Luna alive, and after one falls mysteriously ill, Jessiersky convinces himself Luna has survived the war and is out for revenge. While waiting for Luna to resurface, he retreats into his library to read about Luna’s family. A series of strange happenings, such as the sound of footsteps in the attic, stoke Jessiersky’s paranoia, and he goes on a disastrously quixotic offensive before going into hiding. Lernet-Holenia’s dark humor propels the narrative, and Jessiersky’s obsession is expertly handled, leading to a wholly unexpected conclusion. Driven by intense psychological descriptions, this tale of inaction against injustice has aged quite well. (Aug.) 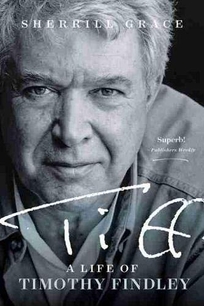 Tiff: A Life of Timothy Findley

Grace (Landscapes of War and Memory), a scholar of Canadian literature and culture, provides a superb biography of Toronto-born novelist and playwright Timothy Findley (1930–2002). Sifting through Findley’s prodigious archive of journals and letters, she traces his path toward finding his identity: as a Canadian who initially moved abroad to pursue his ambitions, as a gay man who faced familial and societal homophobia, and as an artist whose early interest in acting gave way to writing. Grace acknowledges key figures in Findley’s life, including actors Alec Guinness and Ruth Gordon—the former mentored Findley’s nascent London stage career; the latter encouraged him to pursue fiction writing as well. Most critically, Grace shows how his partner, Bill Whitehead, whom he met in 1962, provided the acceptance Findley needed; it was at their rural Ontario farmhouse where all his major works were written. Grace also provides valuable background on Findley’s working methods—for example, how the exacting process of reworking his 1967 debut, The Last of the Crazy People, transformed him into a lifelong “obsessive reviser” who carefully preserved all his drafts just “in case [he] might need them.” Written with great sensitivity and attention to detail, Grace’s comprehensive biography succeeds in giving a complete picture of its subject as an individual and an artist. Agent: John Pearce, Westwood Creative Artists. (Aug.) 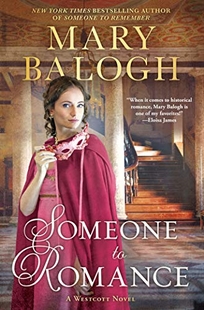 The reluctant heir to an earldom discovers love with the sister of a duke in the pitch-perfect eighth romance of Balogh’s Westcott Regency series (after Someone to Remember). At the “old” age of 25, Jessica Archer, sister of the Duke of Netherby, decides the time has come to find a husband—despite not being enamored with any of the men she’s met during the London season. Then Gabriel Thorne, a British nobleman who fled England 13 years ago to become a successful Boston merchant, returns to town and boldly declares his intention to marry her. At the same time, the handsome Anthony Rochford, a man who anticipates inheriting the title of Earl of Lyndale, begins courting Jessica. Jessica is more attracted to Gabriel than to Anthony, though she’s not sure if she actually likes him. But when Gabriel reveals that he’s come to England to claim the title of Earl of Lyndale for himself, hoping to use it to prevent the eviction of his beloved aunt, Jessica finds herself all the more drawn to him. Balogh masterfully pulls back her characters’ aristocratic facades to delve deep into their personalities. The riveting, fast-paced narrative contains just enough intrigue to keep the pages flying. Regency fans will be delighted. Agent: Maria Carvainis, Maria Carvainis Agency. (Aug) 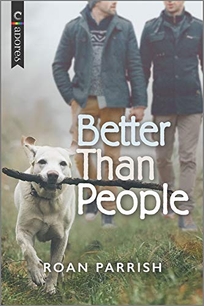 Parrish (Small Change) delivers an irresistible queer romance between a grumpy children’s book illustrator and a pathologically shy graphic designer. When Wyoming illustrator Jack Matheson—already down in the dumps following a business partner’s betrayal—breaks his leg while walking his menagerie of rescue dogs (and one cat who likes to lead the way), he hires Simon Burke to walk his pets. Simon has debilitating anxiety and has an easier time interacting with animals than with humans, but the more time he spends with caring, supportive Jack, the more he opens up. Parrish nails both the throat-closing hell of Simon’s anxiety disorder and his palpable desire to have a healthy relationship, as well as Jack’s frustration at not always being able to soothe Simon’s fears. Superb supporting characters—especially Simon’s firecracker of a grandmother, Jean, and Jack’s doting older brother, Charlie—add considerable charm. This sensitive tale will leave readers with big smiles on their faces. (Sept.) 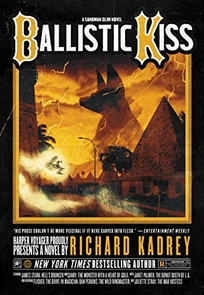 James Stark, aka Sandman Slim, is back in Los Angeles for the pitch-perfect penultimate adventure in Kadrey’s long-running urban fantasy series (after Hollywood Dead). Having recently returned from the dead, Stark is haunted by nightmares of his time in hell and struggles to navigate the world of the living. His old flame, Candy, has moved on, and Stark strikes up a new romantic connection with Janet, a nonbinary thrill-seeker who gets involved with a dangerous group of adventurers known as the Zero Lodge. Meanwhile, Thomas Abbot, the leader of the California Sub Rosa, orders Stark to eradicate a stubborn infestation of murderous ghosts in Little Cairo. In the process, Stark discovers a 40-year-old mystery involving a murdered actor whose story could bring an end to the ongoing war among the angels. The prose simmers with Kadrey’s characteristic blend of cynicism and absurdist humor, but the nuanced character development and exciting relationship-building make this feel like a brave new direction for the series. This addictive urban fantasy works in its own right—and sets things up for what promises to be one hell of a finale. Agent: Ginger Clark, Curtis Brown. (Sept.)