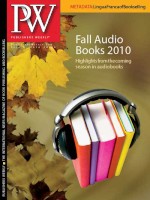 The Twilight of the Bombs (Knopf) is the fourth and final volume of Richard Rhodes's seminal work chronicling the world's nuclear history, a three-decade journey that began with his 1988 Pulitzer and National Book Award winner, The Making of the Atomic Bomb (Simon & Schuster). So it's appropriate that to reach the beach town of Half Moon Bay, Calif., to visit the author who has detailed man's precarious waltz with nuclear annihilation, a traveler from San Francisco must pass through Devil's Slide, a treacherous and controversial patch of Highway 1.

Rhodes settles into a table at Sam's Chowder House overlooking the Pacific and begins talking about writing The Making of the Atomic Bomb. When he started, he mistakenly thought he could tackle the subject in one book. Volume two, Dark Sun: The Making of the Hydrogen Bomb (S&S, 1995), followed, and Knopf published volume three, Arsenals of Folly: The Making of the Nuclear Arms Race, in 2007. After 30 years researching and writing about that race from its beginning through the world wars up to Barack Obama's presidency, Rhodes says he's hopeful, as reflected in the latest book's subtitle: Recent Challenges, New Dangers, and the Prospects for a World Without Nuclear Weapons.

"We are a very clever species, and I don't think we are going to blow ourselves up," he says. "But as we have learned recently in the Gulf of Mexico, ‘accidents happen.' " Also, North and South Korean tensions are back in the news. Yet even as close as the U.S. came to another Korean War when former President Carter's diplomacy nearly collided with Clinton White House policy, as shown in Twilight, Rhodes sticks with a cautious, positive outlook.

"Is there any better evidence of the military uselessness of nuclear weapons than six decades of futility?" he asks near the end of Twilight.

Rhodes's 23 books—both fiction and nonfiction—include several more on nuclear issues, but also John James Audubon (Knopf, 2004), a biography; several novels; and two memoirs. In his long career, Rhodes has specialized in what he calls "verity," or true stories, which is the term he prefers to nonfiction.

His subjects bound from psychic dogs and soy beans to Nazis—but his signature is his ability to capture the mini-biographies of people in whatever story he tells, whether they are Manhattan Project physicists or diplomats, weapons inspectors or heads of state.

"I have yet to meet anyone who didn't have their characteristic preoccupations in place by the time they were 12 or 13 years old," Rhodes says, revealing how as a youth he was captivated by the nature adventures in the Dr. Doolittle books, which he describes as a "child's Heart of Darkness." It follows, then, that for his next project, just signed with Knopf, Rhodes returns to the natural world in a book about United States history, from Columbus washing ashore to the Revolution. "It's about the impact of people migrating to this incredible idyllic wilderness and how they deal with it," says Rhodes.

He is also playing around with an autobiographical novel, set in 1954, that revolves around teenagers who meet and fall in love at summer camp. "First love is so fun—the sheer wonder and innocence," he says.

And there's the short biography of Hedy Lamarr, for Doubleday's Alfred P. Sloan Foundation series on inventors and innovators of the 20th century. Lamarr was an actress, yes, but also the owner of a patent for unjamming WWII torpedoes. "Let's just say she invented, with the composer George Antheil, the basic technology for 3G networks, Bluetooth, GPS, and much more. What would we do without our movie stars?" Rhodes teases.

And nuclear technology? Rhodes says without hyperbole that it's "the largest change in human history since fire," but he admits that he is not unhappy to move on. "I know as much as I am going to know about it," he says.

A version of this article appeared in the 07/05/2010 issue of Publishers Weekly under the headline: Richard Rhodes, the Atom Bomb, and Hedy Lamarr
TOC
ADVERTISEMENT
More from pw