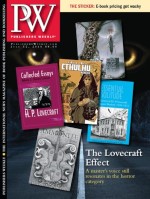 Fans of horror and dark fantasy have an astounding appetite for lavish limited-edition hardcovers. Producing close to 60 genre titles a year in print runs as small as 250, Subterranean Press is happy to keep those readers fed.

A horror fan since his teens—when "a well-meaning co-worker lobbed a copy of Stephen King's The Stand at me"—Subterranean Press owner William Schafer says he and the business's cofounder, Tim Holt, had modest goals at first. The press released two chapbooks in 1995 and began its now famous hardcover line the next year. Neither founder had planned on taking things further, but Schafer says the number of releases slowly began creeping up.

"What became readily apparent is that it wasn't so much more work to do four hardcovers a year than two," he said. "Eight was a significant jump as far as workload. The next jump took place when we hit the 20s."

Based in Burton, Mich., Subterranean publishes dozens of original and reprint titles by giants like Ray Bradbury, Poppy Z. Brite, and Peter Straub and popular midlist writers such as Cherie Priest and Caitlín R. Kiernan. These books first appear in high-quality hardback editions, and some are also made available as trade paperbacks; print runs for both formats range from 250 to 5,000.

For the more tech-savvy reader, Subterranean has also made a recent foray into digital publishing, with Kindle editions of John Scalzi's The God Engines and bestseller Robert McCammon's Mister Slaughter. While Schafer said he isn't sure how these e-book efforts will work out, he is hoping to digitally resurrect several out-of-print titles. "I do know that it will allow access for more readers," he says. "At this point, we're not looking at our e-books as a huge revenue stream so much as a service to our readers."

This is just one example of Subterranean's impressive versatility. Its publications run the gamut from novels and short story collections to novellas, chapbooks, and even picture books, like Patrick Rothfuss and Nate Taylor's The Adventures of the Princess and Mr. Whiffle: The Thing Beneath the Bed, a spooky illustrated story in the tradition of Edward Gorey that the press has labeled "not a book for children." The press also supports a quarterly online magazine of free fiction, which was begun to introduce Subterranean to new readers. Since the magazine moved from paper to the Web, Schafer says that sales at the press have soared.

"I like to think that we don't subscribe to any particular ethos when it comes to our lineup," says Schafer. "We publish whatever happens to interest me as a reader, and what I think will sell. Many authors, from Charles de Lint to, more recently, Cherie Priest and Peter V. Brett, have used us as a place for projects which—because of subject or, especially, length—wouldn't be appropriate for their New York publishers. I see us as augmenting a writer's New York career: a chance for them to explore lengths, subject matter, and characters that might not find a place in their longer novels."

The press's willingness to consider edgier, more experimental projects extends to publishing books with multiple full-color interior illustrations, an undertaking that many major publishers avoid. In the past, Subterranean has worked with artists such as Ted Naifeh, Michael Komarck, Tom Kidd, and Charles Vess.

"It's something you don't see often in fiction released by New York publishers, though when they do it right, there's nothing quite like it," says Schafer. "Well-done illustrations enrich the reading experience, in my opinion, which informs our approach to a lot of books."

Much of that approach remains the same as Subterranean moves toward its second decade with plans to expand its trade paperback line Far Territories and release hardbacks by core Subterranean authors and newcomers alike. "We're definitely in a growth phase, driven not only by strong wholesale and online retail sales but by direct sales through our Web site," Schafer says.

As for what prompts horror readers to fill their shopping carts online and off with collectible books more often than other readers do, Schafer can only shake his head and call it "one of life's mysteries."

JoSelle Vanderhooft is the editor of Sleeping Beauty, Indeed, available from Lethe Press.

A version of this article appeared in the 07/12/2010 issue of Publishers Weekly under the headline: Little Shop of Horror
TOC
ADVERTISEMENT
More from pw