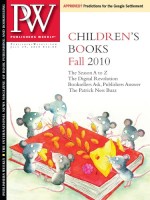 'Los Angeles Review of Books' to Launch This Fall

The Los Angeles Review of Books, an online periodical that will include multiplatform book reviews, author profiles, Skype interviews, and readings as well as critical essays on classic authors will launch in the fall under the direction of Tom Lutz, professor and chair of the creative writing department at the University of California at Riverside.

Lutz, author of cultural histories Doing Nothing and Crying, has enlisted a roster of more than 200 contributing editors that includes several Pulitzer winners and is representative of the growing importance of Los Angeles and West Coast–centric writers. Jonathan Kirsch, Marisa Silver, Aimee Bender, T.C. Boyle, Janet Fitch, Jerry Stahl, and Carolyn See are among the bestselling authors who have signed on to contribute. LAROB will also have national and international scope, with coverage of literary news in Mexico City, London, and St. Petersburg, Russia. "We want to be as cosmopolitan as literature itself," said Lutz, who wanted to create the periodical after watching so many Sunday book supplements die.

LAROB hopes to have an annual operating budget of about $500,000, with Lutz leading the fund-raising efforts. Support has come in thus far from U.C. Riverside's College of Humanities, Arts and Social Sciences; the Rosenthal Family Foundation; other grants; and private donors. Lutz will sell advertising on the LAROB Web site and hopes the periodical, which will also operate as an online bookstore, will profit from click-through book sales that will use IndieBound bookseller members to fulfill orders. "We'll be an agent for other products, too," Lutz said, "beginning with coffee and wine." Although the Web site will offer free viewing, LAROB will encourage premium subscriptions that will include exclusive features and interviews. Lutz hopes to eventually publish a print edition of LAROB, perhaps as a quarterly or a "best of" annual issue so that the periodical can benefit from a newsstand life as well.

Depending on the level of funding, Lutz has a group of staff editors ready to go. The writers will be paid, and it is Lutz's intention to "become the best-paying book review outlet around." The Web site, still under construction, will premier with essays by Jane Smiley on Jessica Mitford and James Ellroy on Beethoven. It will also feature vintage book reviews written by Virginia Woolf and Herman Melville.

LAROB has been in development for nearly two years. "I figured I could either write another book, or do this," Lutz said. "Now I can be of service to others."

A version of this article appeared in the 07/19/2010 issue of Publishers Weekly under the headline: 'Los Angeles Review of Books' to Launch This Fall
TOC
ADVERTISEMENT
More from pw