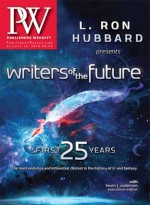 There are exceptions, of course, but science fiction and fantasy covers often feature images of lone figures and bright flashes of light. Trilogies can take years to be published. Publishers often divide their advertising budgets between print and online ads. And then there's Orbit, Hachette's science fiction/fantasy imprint, which is turning three this September. Its innovative ways of packaging, publishing, and promotion have resulted in a robust imprint that has grown significantly each year.

Orbit launched in the U.K. in 1974, but didn't start a list in the U.S. until 2007, when it became an imprint at Little, Brown. Two years later, the imprint, along with graphic novel and manga imprint Yen Press, became its own division within Hachette Book Group. Orbit and Yen share art and marketing departments, and HBG v-p Tim Holman is publisher of Orbit and Yen. Orbit now publishes 60 books a year in the U.S. and has 128 books in print. It has 31 authors on its list and publishes a mix of hardcover, mass market, and trade paper formats; all of its books are available as e-books.

Under Holman, Orbit has redefined the look of SFF shelves by focusing on distinctive cover styles that have appeal beyond the core SFF readership. Its covers have won awards for innovation and design, including prizes from the Bookbinders' Guild of New York for Soulless by Gail Carriger and Tempest Rising by Nicole Peller. Holman said there is great variety within the SFF genre, but that there is "sometimes a temptation to publish generically, so that one emphasizes the similarities among books rather than the differences." Orbit has tried to focus more on authors than genres, creating what Holman calls "distinctive visual brands" for its authors. He also said the imprint tries to avoid "genre clichés" in its covers. Having been spun off of a British imprint, Orbit U.S. continues to keep close ties to its U.K. counterpart. The two imprints often acquire books collaboratively and work together on covers and pub dates.

Orbit has also had success by adhering to some counterintuitive publishing schedules. For instance, it launched newcomer Brent Weeks's Night Angel trilogy by publishing three books in three months, so readers wouldn't have to wait a year or two between books. The series took off; the first book hit the New York Times bestseller list six months after being published, and sales of the series are approaching the million-copy mark worldwide.

Holman said Orbit supports its books with advertising—but that advertising is almost exclusively online, via targeted Google and Facebook ads, as well as ads on genre Web sites. "If we were to take an ad in the New York Times, I think that would be a missed opportunity," he said. "Online, there are far more effective ways of marketing to our potential readers." Once a book pubs, Orbit focuses on building an author's profile online. That often means creating a Web site, a video, and a social media campaign—in addition to promoting the book on OrbitBooks.net, which gets 30,000 visits a month.

This fall, Orbit will begin selling short fiction on its Web site, with prices for e-content tentatively set for $1.99 and some possible bundling options available.

Holman is confident Orbit will grow even more in the next three years. "We've had a sequence of publishing successes that have really helped everybody involved in the imprint and in the science fiction world generally," he said. "The more publishing successes one has the more confident people are we'll have more."

A version of this article appeared in the 08/23/2010 issue of Publishers Weekly under the headline: Orbit Makes a Third Rotation
TOC
ADVERTISEMENT
More from pw