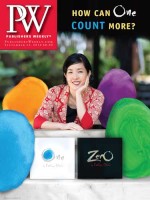 Attending the Moscow Book Fair 20 years after a first visit to the U.S.S.R., then as publisher of PW and as part of a U.S. Information Agency delegation, is a world away from my prior experience. Then, the ideas of advertising, promoting, and marketing a book were alien concepts, and creating a commercial book itself was an impossibility. Now, in a freer system of book commerce, there is a thriving array of commercial publishers. On the first day of the fair, which ran from September 1 to 6, the show was smaller than anticipated, considering that it is a consumer event, but later in the week, particularly on the weekend, the crowds swelled. The exposition hall is a new, column-free structure that BookExpo America's Steve Rosato envied until he learned that the only restroom was at the far end of the massive hall and required a hike to a second level.

Vladimir Grigoriev, known to most simply by his last name, is the indefatigable director of the Federal Agency for Press and Mass Communication (FAPMC), of which publishing is but a small component. Given his own background as a publisher, he takes personal pride and great interest in the advancements of this nascent industry. FAPMC has big plans for next year, when Russia serves as London Book Fair's official country, and 2012 promises the same for BEA.

As yet, the Moscow Book Fair has modest international participation even as more Western publishers are beginning to take note of the BRIC countries (Brazil, Russia, India, and China), which represent a collective population of almost three billion.

Will Atkinson, sales & marketing director of Faber & Faber, told PW that the size of the Russian market alone suggested that more attention should be paid by Western houses. Anna Rafferty, director of Penguin Digital UK, gave a spirited presentation at a well-attended meeting, outlining Penguin's aggressive efforts in the rapidly changing e-book field. My own presentation covered highlights from the new Consumer Attitudes Toward E-Book Reading study just released by the Book Industry Study Group. My co-presenter, Alexei Kuzmin, agreed that most of the major U.S. market demographics were true of the Russia market as well. Russian e-books are priced in the 30–45 ruble range (about $1–$1.50), he said, and nearly 10,000 e-book titles were sold daily. Unfortunately, those sales are only 10% of the turnover, with the other 90% being pirated titles. Kuzmin hoped that new Russian Federation regulations will help curb piracy and eliminate some of the red tape of current taxing legislation. He predicted that prices may increase over time, to the $3–$5 range and that U.S. prices would decline to meet in the middle.

Academia Rossica started more than 10 years ago to introduce contemporary Russian writers into the English-speaking world. Svetlana Adjoubei, the whirlwind director behind AR's efforts, reports that AR, with offices in both Moscow and London, will now serve as a full literary agent, helping authors featured in English translation in the organization's semiregular publication Rossica, the International Review of Russian Culture (for copies, go to the Web site academia-rossica.org).

Grigoriev explained that the translation infrastructure of agents, scouts, interpreters, and the like does not exist in Russia in an organized way. So the FAPMC plans to introduce these elements in a more structured manner. During this year's fair, FAPMC hosted more than 100 interpreters from 27 countries. Grigoriev said that while countries like France, Germany, and Italy have strong programs and a historic understanding of the benefit of including of Russian literature in their publishing platforms, the Anglo-Saxon countries lag. Andrew Nurnberg is perhaps the best-known agent for Russian translation into English-language markets.

The International Lounge, organized and hosted by AR, held hourly presentations on such issues as the merits of participating in LBF and BEA. The end of the BEA presentation was greeted with a q&a, including two animated Russian reporters. They made long-winded speeches before delivering questions reminiscent of previous times.

Vladimir Putin created his own stir by showing up for the second day of the fair, an event broadcast on national TV. In fact, it was the fair's second night of coverage as the opening was also featured on TV. Vadim Meshcheryakov, publisher of IDM Books, presented Putin with a copy of his children's Best Book Award for Letters from Insects. Meshcheryakov said that the international publishing community gave his books far more serious consideration after he published them in German and presented them as German titles. Meshcheryakov plans to introduce his titles via new publishing operations in France and Italy within the next year.

Among Russian publishers exhibiting at the fair was Irina Shishova, foreign rights director of Eksmo, which reported sales of $215 million before the global economic crisis and now has annual revenue of about $200 million. Last year alone, Shishova acquired nearly 1,300 foreign titles on behalf of Eksmo, of which 15% were children's. Eksmo's publishing program includes nearly 1,000 titles per month and over 100 million copies printed last year. The company reports that it commands 17% of the domestic children's market, making it the market leader, as well as a 37% share of science fiction and a 15% share of contemporary fiction. Not unlike other global optimists, Eksmo predicts that digital sales will represent 25% of revenue by 2014.

Arkady Vitruk, CEO of Azbooka-Attikus, and winner of this year's adult Best Book Award, which was presented on the first day of the show, discussed with PW some of the challenges a Russian publisher faces. Piracy, pricing, and transportation echoed the concerns of several others. Pricing in Russia is controlled by the retailers, a fact that makes rights deals based on retail price impractical and challenging for foreign publishers. The high cost of shipping to the Urals, Siberia, and Vladivostok, for example, makes a single retail price impractical as costs are too high for retailers to absorb and too variable for publishers to factor in. The costs of shipping are exacerbated by the need to carry inventory for ultimate sale with the average book being printed and inventoried in print orders of 12,000–15,000. Vitruk said that this domestic market reality is difficult for foreign publishers to understand, yet he still acquires nearly 70% of his titles from abroad, mostly from Europe. Azbooka-Attikus's revenue exceeds $50 million on a list of nearly 500 titles.

During a meeting with Grigoriev later in the week, he acknowledged the challenge that the vast land expanse represents and that the FAPMC is exploring additional printing capabilities through a new plant outside Moscow, with explorations of POD capabilities that could address the problem of delivery costs and inventories currently required to be kept on hand. He reported that currently much printing is being done in Hong Kong.

A version of this article appeared in the 09/13/2010 issue of Publishers Weekly under the headline: Russian Book Market Revs Up
TOC
ADVERTISEMENT
More from pw