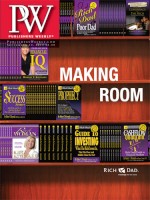 Critic Harold Bloom's upcoming book, Till I End My Song: A Gathering of Last Poems is an anthology of various poets' final works, or works in which they apprehended death's finality, along with a comment on each by Bloom.

How did you decide to put this anthology together?

I knew it would come out after my 80th birthday, and many of the more recent poets in it were very close personal friends, and in a strange way, it become a kind of lament for departed poets like Robert Penn Warren, Robert Fitzgerald, Elizabeth Bishop, Jimmy Merrill, and Archie Ammons, one of the two or three closest friends I had. It became a kind of general attempt to decide just what are the limits of the consolation, to think about the pertinence of poetry as one gets very old.

What does the looming subject of death bring out of poets that other subjects don't?

Do you think of this as a sad book?

I would not want this book to be thought of as a sepulchral work—it is a kind of labor of love. I've been reading poems in English from before I was 10 years old obsessively, and they're what I care about most. I don't know of many traditions of the high arts which are as superbly strong and satisfying as the great traditions of British and American poetry.

Do you see yourself as an ambassador of poetry, working to bring it to a larger audience?

I've done that for a long time. For the last third of a century, I've made it clear that I don't want a single academic reader. I write for a general audience all over the world. I would hope that people who don't ordinarily read poems or who don't read as many poems as they should might perhaps find some poems here that will—what is Coleridge's phrase?—that will find them.

A version of this article appeared in the 09/20/2010 issue of Publishers Weekly under the headline: Swan Song Singers: PW Talks with Harold Bloom
TOC
ADVERTISEMENT
More from pw