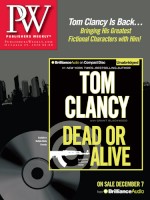 Tweets About the Future

That is: there will always be a bunch of awkward types going home, by themselves, to face, if not blank paper, blank screens.

This work will be written in coffee stains, and spilled milk, and melted crayon, and lipstick on collars, maybe a little human blood.

As always. What doesn't matter is what form this literature of the future will be published in. That's a practical issue—but not much else.

If the present is any guide, in the future there will be a variety of delivery systems for the medium we all love so passionately.

People will read on their phones, on their tablets, on their computers, on their televisions, maybe on the seat-back screen at 36,000 feet.

I fervently believe they will also be reading books. For flexibility and long-term data storage, nothing comes close to the book.

The announcement of the death of the book, as pronounced by pessimists, oligarchs, and those who ought to know better, is premature.

When I curl up at night, e.g., I surely do not curl up with my Kindle, which is dusty, running low on its charge, and largely unread,

and I think the guy who wrote to me about reading my novel on the iPhone (where it's 2,200 pages long) should have better things to do.

That said: yes, the gadgetry of the future is at hand. Folks make their own decisions about how and when they employ technology.

And so what are we to say then about the daily use of these gadgets? How might we apply ourselves to a culture of gadgetry run amok?

When I wrote my story "Some Contemporary Characters," originally published on Twitter by the guys at Electric Literature, I was indifferent

to Twitter as a medium, and, excepting its use by Palestinians and Iranians, I am still suspicious. Twitter is mostly press releases and the

inner lives of the dramatically self-involved. And yet: it's a feature of American life in the historical moment, for good or ill. Insofar

as it is part of American life as lived, Twitter is fit material. It's exactly what describes these times, these bitter, disputatious,

The books, magazine articles, essays, blog posts, poems, and plays of the present moment leave out Twitter at their considerable peril,

iPhone, the Droid, the iPad, and whatever the next device is. If this is how people live, this is what people should be writing about.

And what do these sites and devices do to our language, our national tongue? They probably do quite a lot. They throw up neologisms and

solecisms, ugly abbreviations, bad prefixes and suffixes and infixes that would make anyone with a trained ear wince with discomfort.

Literary writing justifiably demands that the language do more, express more. But it is also responsible to listen to how the language

is actually employed. There's beauty in this truth. If language is a prompt box that allows 140 characters, then that is where we are.

There may be bumps in the road while the writers of the moment attempt to account for all this change. I was, as many know, roughed up a bit

in the aftermath of my Twitter experiment—for insufficient technical foresight. But should clumsiness invalidate experiment?

Experiment and sensitivity to the contours of syntax and usage in the tech-heavy future are simply pragmatic. Change is inevitable—

though writing goes on in the usual way. These dual aspects of the story—evolutionary and conservational—should make worry unnecessary.

The writers are going to write, and the publishers will be around to try to organize and schematize this work for the reading public,

who are hungry, despite the gloom and doom, the apocalyptic anxiety, for stories, and for the pathos and the drama thereof.

The literary form is a "mirror walking down a road," Stendhal reputedly said, and when literature goes out on its constitutional these days,

it catches glimpses of microchips, LCD displays, and sequences of ones and zeroes by the side of the superhighway. But: don't panic!

There are readers out there among those digits. Readers operating devices. Readers eager for the great variety of stories around them. n

A version of this article appeared in the 10/25/2010 issue of Publishers Weekly under the headline: Tweets About the Future
TOC
ADVERTISEMENT
More from pw