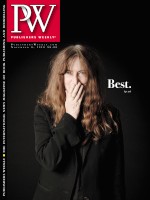 B&N Amends Poison Pill
The Barnes & Noble board of directors has amended its poison pill provision to limit the number of new shares controlled by the Riggio family. Under the changes, any additional equity grants to Len Riggio, Steve Riggio, and their family members would trigger the provisions. In addition, if any of the Riggios were to acquire additional shares through the exercise of existing options, they must dispose of the option shares within 60 days, and they must vote the option shares pro rata with all other shares voted so as not to influence the outcome of any shareholder vote.

RoyaltyShare Adds Price Monitoring
RoyaltyShare has added a new service called Sales Feed Price Validation, which will allow publishers to monitor the price of e-books being offered by different e-book retailers. The new service allows publishers to manage transactions in which the actual sale price reported by retail agents does not match the price set by the publisher. The service was developed in response to the agency model price and can also be used to track the correct discount on e-books sold under the retail model. The first client for the service is Hachette.

CDA in Deal With Martha Stewart
Callaway Digital Arts has a deal with Martha Stewart to create a series of apps for iPad, iPod, and iPhone based on her lifestyle products. The firm has also received $6 million in financing to create content for Apple's iOS platform and build multimedia studios in San Francisco and New York.

HC Sales Down
HarperCollins parent company News Corp. has stopped breaking out results for the publisher, moving its performance into a broad "publishing" segment. A brief mention in News's SEC filing said sales at HC in the quarter ended Sept. 31 fell because of fewer new titles.

Hachette Signs With NetGalley
Hachette Book Group has signed with digital galley distributor NetGalley to circulate electronic galleys and press material to the media. This is the second deal NetGalley has signed with a big six publisher, after signing HarperCollins this summer. NetGalley allows publishers to send digital press kits including video, audio, photos, and more.

A version of this article appeared in the 11/08/2010 issue of Publishers Weekly under the headline: News Briefs: Week of 11/8/10
TOC
ADVERTISEMENT
More from pw