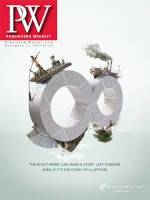 No Platform? No Problem

Dorie Greenspan doesn't have a TV show or a magazine, but her new cookbook has achieved record success

Although PW's recent panel discussion on cookbooks focused on digital publishing, Dorie Greenspan's Around My French Table: More Than 300 Recipes from My Home to Yours (Houghton Mifflin Harcourt, Oct.) was mentioned repeatedly as an example of a successful cookbook best enjoyed in print. With good reason: it is a beautiful object, 544 glossy pages filled with stories about Greenspan's Parisian friends and anecdotes about, for instance, the French practice of pouring the last sips of wine from your glass into a dwindling bowl of soup and finishing them off together.

Though Greenspan is already considered one of today's premiere cookbook authors, the book, her 10th, has reached a level of success unprecedented for the author. Since its October 8 publication, French Table has sold 40,000 copies; HMH has gone back to print twice and expects to sell 60,000 total by the end of the year. It reached the #13 spot on the New York Times's hardcover advice list and has appeared on many best-cookbooks-of-the-year lists, including PW's, an impressive feat, considering the author lacks a TV show or a magazine, and is not quite a household name, unless your household includes serious bakers who favor sablés over Stella D'oro.

So how has Greenspan done so well? She and her editor, Rux Martin, attribute the success largely to the Internet. Greenspan, who lives in Connecticut, New York, and Paris, has some 36,000 Twitter fans, and her blog, In the Kitchen and On the Road with Dorie, which launched in early 2008, receives 70,000 visitors monthly. "All of the sales [of Around My French Table] were pretty much created online," said Martin.

Greenspan's readers buy her books, and enjoy the tactile allure a print book like French Table has to offer. But online, they blog and tweet about their adventures cooking Greenspan's recipes, creating a powerful community. One of the enthusiasts, Laurie Woodward, started the online baking group Tuesdays with Dorie after receiving Greenspan's last book, Baking: From My Home to Yours, in 2008. She made a New Year's resolution to bake one recipe a week from the book. Two years later, the club has more than 300 members, with each one taking a turn selecting a recipe for everyone in the group to bake once a week. On Tuesdays, everyone posts their results. Woodward also runs French Fridays with Dorie, where members cook from Around My French Table and report back. "Every place I've gone on book tour, I've met people who've been part of this group," Greenspan told PW.

Greenspan's success, despite the lack of a traditional media platform, goes against common wisdom, and, to a degree, so does her book's subject. Martin said many accounts seemed lukewarm on the idea of a French cookbook prior to publication. "We were getting feedback that said people are not interested in French food—they're scared of it. We were up against what I call the ugly perception of French food: that it's complicated, it's not spicy, it's not ingredient-driven." Obviously, that initial reluctance has ebbed. "I think that today French food is far more recognizable to Americans than it ever has been," Greenspan said, remarking that French food has changed since Julia Child wrote Mastering the Art of French Cooking. When one of Greenspan's French friends heard about the book, she told Greenspan, "Please don't say every table is set with a red-and-white checked tablecloth and all we eat is boeuf bourguignon." And Greenspan didn't: French Table has recipes for fresh tuna, mozzarella, and basil pizza and coconut-lemongrass braised pork.

With recipe sites getting more traffic than ever, some cookbook authors and publishers worry about them "cannibalizing" cookbook sales. But Greenspan and Martin have found that putting recipes online just "entices people to look for more," Greenspan said, and some of those people will become book buyers.

Although Greenspan's work has thrived in print, it is also available in digital editions; Baking can be found in e-book format, and French Table will follow soon. Greenspan is working with a developer on an app for Baking, even though she finds that apps lack one cookbook component that she finds crucial: the stories that go with the recipes. But, she admitted, "Not everybody wants those stories. There are people who enjoy having the book, and the people who are happy to just get recipes are not the people who would buy my book [anyway]."

E-books will probably have made great strides by 2013, when HMH publishes Greenspan's next book, Baking with Dorie: Lessons from the Masters. But it's a safe bet that Greenspan's fans (how many Twitter followers will she have by then?) will still gladly pay for it—in print. And talk about it online.

A version of this article appeared in the 11/22/2010 issue of Publishers Weekly under the headline: No Platform? No Problem
TOC
ADVERTISEMENT
More from pw