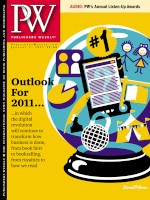 Although there were still a few days left in the 2010 selling season at press time, the clear winners for the year are already in: in nonfiction the unlikely combination of George Bush, Chelsea Handler, and Elizabeth Gilbert ruled Nielsen BookScan's nonfiction list, while Stieg Larsson, in a mix of hardcover, trade paperback, and mass market paperback, took five of the top 10 fiction spots. In the children's category, four authors were responsible for the 10 bestselling titles, while the audiobook bestsellers came from a wider range of authors.

Bush's Decision Points was popular enough that it not only easily topped the nonfiction charts in 2010, with more than 1.6 million copies sold in the outlets tracked by BookScan, but it led audiobook sales as well. The film version of Eat, Pray, Love helped keep Gilbert's book high on the charts, with the movie tie-in edition alone selling 516,000 copies. Handler's two top 10 titles, one each in hardcover (Chelsea Chelsea Bang Bang) and trade paper (Are You There, Vodka? It's Me, Chelsea) combined to sell 971,000 copies in the outlets tracked by BookScan last year. Two nonfiction titles from houses outside of the big six hit the BookScan top 10—Michael Lewis's The Big Short, published by Norton, and Strengths Finder 2.0 by Tom Rath, from Gallup Press.

Random House has already said that it expects to sell more than 14 million copies of Larsson's Millennium trilogy in all formats in 2010, and the five top-selling Larsson print titles on the BookScan fiction list sold over seven million copies. The audiobook editions of the three Larsson novels added another 125,000 in sales. The one fiction title among the top 10 BookScan bestsellers not from a major house was A Reliable Wife by Robert Goolrick, published by Algonquin, which sold 634,000 copies.

In children's, Stephenie Meyer and Suzanne Collins managed to place the second and third bestselling titles on the BookScan list, but then it was all Jeff Kinney and Rick Riordan. Kinney sold more than 3.7 million copies of his four Wimpy Kid novels, and Riordan sold just under 2.7 million copies of his four bestsellers, which received a boost from the February movie Percy Jackson & the Olympians.

A version of this article appeared in the 01/03/2011 issue of Publishers Weekly under the headline: The 2010 Decision: Bush, Larsson Tops
TOC
ADVERTISEMENT
More from pw