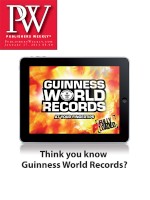 Execs Look Ahead At Kodak Panel on Industry's Future

Last week, a collection of top executives from printers, publishers, and retailers gathered in New York to discuss the future of the industry. The panel, sponsored by Kodak and moderated by PW co-editorial director Jim Milliot, took place at the New York Public Library and confirmed two things: the retail market is harder than ever to gauge, and key changes in printing technology should help make the supply chain more efficient.

One of the main issues facing the industry, panelists quickly agreed, is publishers' growing inability to effectively set print runs. As sales for digital books has risen sharply, and the retail market has deteriorated, panelists said the ability to judge how much product to print has become extremely difficult. For this reason, inkjet technology—which would allow faster and cheaper printing—is something the panelists said could change the industry. Jac Garner, president of the four-color and book manufacturer Webcrafters, put it succinctly early on: "We believe high-speed inkjet will be the biggest development in publishing in the past 50 years."

Jim Robinson, v-p of operations and administration at Harlequin, said the biggest challenge publishers like his face today is managing the supply chain. And Robinson was not alone in speaking to the growing difficulties of feeding a market in which retailers have become more demanding and the number of channels to fulfill has increased. While all panelists acknowledged that e-books are an essential part of the future, handling the current climate, where digital is still a small part of revenue, is tricky.

Craig Bauer, senior v-p of production and manufacturing at Hachette, noted that, through the holidays, when e-book purchasing saw a major spike as consumers received digital readers for gifts, digital titles accounted for as high as 25% of his house's sales. That figure compares with an annual average of 10%–15%. The challenge, he noted, is "managing the transition," as publishers need to invest in infrastructure to convert books, guard against digital piracy, and deliver titles electronically. Those costs are not being offset by rises in revenue. Instead, Bauer said, publishers are making investments in a digital future while the reality is that 80% to 90% of consumers in the trade market are still buying physical books.

Bauer said the current situation has unquestionably put a "downward pressure on margins," especially when factoring in the low price point of e-books, and the question is how long it will take for costs to start flattening out. Bauer's hope, along with others on the panel, is that the flattening-out period is just a few years away.

The topic of returns pointed the conversation back to the potential for inkjet technology to change the game. As the retail market has stalled, Robinson said that, more and more, the burden has fallen on publishers to deliver books in shorter periods. Requests that might have come weeks in advance years ago, now come days in advance. "Retailers are expecting publishers to be inventory managers," Robinson said, adding that this is why "inkjet will be so important." Bauer echoed that sentiment, saying that inkjet brings huge cost savings, which will put less pressure on publishers to make difficult, advance decisions about print runs.

Outside of the printing and distribution sphere, the panelists also touched on such pressing issues as discoverability. As more and more bookstores have closed—all panelists concurred that Borders going out of business would be a severe blow to the industry on the whole—the question of how to promote books to consumers becomes more challenging. Jeffrey Matthews, v-p of corporate strategy, business development, and investor relations at Scholastic, said the goal for his house is spending more energy on "getting books into people's hands through nontraditional channels." The hope, he said, is that channels we might not know about yet will rise to fill the void left by traditional bookstores.

Panelists' consensus on what lies ahead? Over the next three years, units sold will increase as the digital book market continues to grow, but because of the lower price point on e-books, revenues will remain flat.

A version of this article appeared in the 01/17/2011 issue of Publishers Weekly under the headline: Execs Look Ahead At Kodak Panel on Industry's Future
TOC
ADVERTISEMENT
More from pw