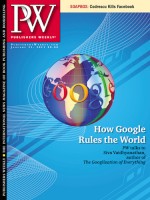 Books are hard to sell, publishers are terrified, authors are dismayed. Hear the whoosh of the e-drain sucking us all in, all the way to Google's huge vat of brain dust! Oh, my bottom line, it hurts! Marketing's been running the show for so long, we've even forgotten what should hurt. It's your head that should hurt; not your bottom.

After years of comfy, provincial, middle-mind pandering by big publishers and their lackey book reviews, we are plain out of literature. But guess what? Just in time to save your bottom come the social networks, a splendid selling tool for the usual pap, cheaper than author tours, cheaper than authors, and certainly unconcerned about content. And so, every well-mannered leech in the mainstream is socially networking like its bottom line was in it. Oh, but woe is unto us! The social networks aren't selling books! They are giving away stupid prose for free! And collecting your tastes for your style chains. The only bottom feeders are the networks themselves, now collecting enough data to make your intellectual endeavors just another shopping day for people who are not you. It's enough to make a leech want to move its proboscis from the drain to the brain.

Sound bitter? Not at all. We've now had enough of dumbing-down to actually enjoy a return to reality. Leave cyberspace! Go to Ohio. Get a job sweeping in Paris. I know from where I speak. We tried being friendly and it didn't work. My 5,000 friends (the limit) on Facebook are all generous and kindly souls. Few of them are mercenaries. They just like to hang out on a rainy day in an old bar and discuss the quirks of their dogs. Except that Facebook is not a bar and all the dogs are virtual. And so is the kindness and generosity of many "friendly" souls, most of whom have something to sell. The dog is just a ploy; it's not for sale, even if it existed. My experience as one of those with 5,000 "friends" on Facebook: the camaraderie utopia of Facebook and every other social network is just pixel puff, literally a u-topos, the nowhere place where data bots work overtime to reduce you to a brainless consumer.

For a writer, these cybervenues are especially deadly. Even if a novelist, let's say, mined a social network for stories, he'd find nothing but lies and fake grins. There would be no smells and no skin. Cries for help are cries for money, and romance is video porn. A poet will be quickly bored by all the commonplace blather, and even an essayist might engage in only the obvious, a pretentious public face. And that's only the possible productive use (I'm being generous); the real purpose a writer displays "friendliness" in any of these places is to sell books. Guess what? Not only do you not sell books by being friendly, you won't sell any because everyone in your "social network" thinks they know you. Why buy your books since you'll tell them everything they want to know for free? Of course, you won't tell them anything of real importance, and that's where the embarrassment comes in. You're selling cheap things. You're faking in the hope that someone will find your "real" stuff. Good luck, pal. The only thing you're doing is selling your soul to Mark Zuckerberg.

The time has come for writers to become inaccessible again. The reason is not some kind of "mystique" that makes people curious (though it helps), but the fact that no real writers ever lay down anything real in public—they work in solitude, they think hard, and their thoughts are rarely nice or "friendly." On 1.11.11 (that's January 11, 2011, American-style), I quit Facebook and other large holdings of my cyber real estate. You want to find me, read my book. If you're looking for friends, go to the bar or fall in love with a fire hydrant. Real dogs use them.

Princeton Univ. Press will publish Andrei Codrescu's new book, Whatever Gets You Through the Night: A Story of Sheherezade and the Arabian Entertainments, in May. This article was printed on real paper and the author got paid.

A version of this article appeared in the 01/31/2011 issue of Publishers Weekly under the headline: Promote This! Forget Facebook
TOC
ADVERTISEMENT
More from pw