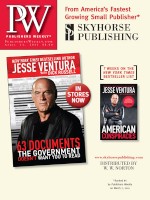 Fantasy novels have been feeding the visual entertainment industry for years, giving rise to films as varied as Harry Potter and the Sorceror's Stone, Eragon, and The Lion, the Witch, and the Wardrobe. Now publishers are hoping some love—and money—will flow the other way. On April 17, HBO will premiere the first of 10 episodes of Game of Thrones, based on George R.R. Martin's Song of Ice and Fire series, and everyone who publishes epic fantasy is looking for a ride on the series' cinematic coattails.

Martin's publisher is at the head of the pack. "Sales for the Song of Ice and Fire series have been strong for years," says Scott Shannon, the publisher of Bantam Paperbacks. "But they have nearly doubled since HBO announced the TV series last year." The long-awaited fifth book in the series is slated for a July release, further whetting fans' appetites (though a few are skeptical, as it was supposed to have been published in 2007).

Other imprints aren't far behind. "We definitely see an opportunity there," says Harper Voyager executive editor Diana Gill. "When Game of Thrones debuts, we expect readers to rediscover this field and discover some of the great new epic fantasy we're publishing, such as David Chandler's upcoming Ancient Blades trilogy." Orbit publisher Tim Holman, who publishes fantasists Joe Abercrombie and Brent Weeks, predicts the miniseries will "help broaden interest in epic fantasy beyond the core genre audience."

Epic fantasy novels have always been lengthy, and the trend shows no signs of slowing. (On the Suvudu blog, Bantam editor Anne Groell recently posted a photo of herself nearly hidden behind Martin's latest manuscript—which started out as the second half of the previous book.) The popularity of these enormous tomes may be part of the reason for the continuing upward trend in e-book sales. "E-books grew to nearly 10% of Pyr sales last year and that figure is expected to double in 2011," says Jill Maxick, publicity director for Prometheus Books. "At least 75% of Pyr titles are currently available for Kindle, with more added every week. We are also working toward making all Pyr titles available as Nookbooks for Barnes & Noble, but their conversion process and pipeline is slower." She adds, "SF and fantasy readers seem to prefer to buy from bricks-and-mortar stores rather than online," but they are still the biggest buyers of Prometheus e-books by a considerable margin.

Orbit publisher Holman reported that Orbit's e-book sales doubled in 2010, and he expects them to double again in 2011, bolstered by "an escalation in digital-only publishing" and a new digital short fiction line. The trend is similar for independent presses: Brett Savory, the founder and editor-in-chief of Canadian "weird fiction" indie Chizine Press, estimates that about a third of CZP's sales are e-books.

To catch this wave, many authors and publishers are looking to expand online content. Editor Stacy Hague-Hill says Tor Books will be putting out more short works that are easier to read on a smartphone. Tor author Peter Orullian is offering Web exclusive short stories set in his Vault universe and has created digital short videos featuring the characters and world of the book. "We also plan to release an expanded digital edition of Vernor Vinge's A Fire Upon the Deep when we publish its long-awaited sequel, Children of the Sky, in the fall," says Hague-Hill. "The new edition will include original editorial notes and exchanges between the author and his editor, Jim Frenkel." Tor publicist Alexis Saarela adds, "I've been pleasantly surprised both by how eager readers are for supplemental online content and by the willingness of our authors to create this extra original work."

However, rumors of print's demise are definitely unfounded, or at least premature. Of 199 respondents to an online survey on Genreville, PW's SF/fantasy/horror blog, half had not purchased any digital books in 2010, and nearly three-quarters said that all or almost all of the money they spent on books went to printed books. When asked how they expected their spending habits to change in 2011, only about 40% of respondents anticipated spending more on e-books than they had in 2010. So while the Internet may be good for free videos and cheap story downloads, the publishers banking on boosts from old media—like HBO—may have the better idea.

A version of this article appeared in the 04/11/2011 issue of Publishers Weekly under the headline: Throne of Gains
TOC
ADVERTISEMENT
More from pw