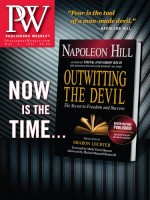 Hyperion Nabs Pirro
Gretchen Young at Hyperion closed on a two-book deal with Jeanine Pirro. David Vigliano sold world rights to two mysteries that will feature a young district attorney named Dani Fox in New York City. The first book is scheduled for winter 2012 and the second book for winter 2013. Pirro, the former DA for Westchester County and a one-time Republican nominee for New York attorney general, is now the star of the courtroom television show Judge Jeanine Pirro.

Mali on Teaching
Poet, former teacher, and recent Internet sensation Taylor Mali sold world rights via Alison Granucci at Blue Flower Arts to a book about teaching to Rachel Kahan at Putnam. Mali gained fame after he posted a YouTube clip of himself performing his poem "What Teachers Make"—the video drew over four million views. In his book, also called What Teachers Make, he offers an inspiring defense of the profession. (Mali is behind a campaign called 1,000 Teachers, in which he is attempting to recruit new educators.) Putnam is planning a winter 2012 publication.

Touchstone Offers Stories
Allie Brosh, a canine lover and winner of the 2011 Bloggy for most humorous blog, sold Picture Stories to Lauren Spiegel at Touchstone. Monika Verma at the Levine Greenberg Agency brokered the North American rights deal for Brosh who, at hyperbole-andahalf.blogspot.com chronicles her misadventures with her dogs. The book will feature content from the blog, and new material.

Atria 'Abdicates' with Nicolson
Agent William Clark closed on a U.S. rights deal for Juliet Nicolson's novel, Abdication, with Sarah Branham at Atria. Nicolson, who wrote two nonfiction books for Grove—The Great Silence and The Perfect Summer—follows the 1936 departure of King Edward VIII from the throne in the new title. This is the first novel for Nicolson, the granddaughter of Harold Nicolson and Vita Sackville-West.

Hodell Walks the Plank for Brown
FSG executive editor Courtney Hodell pre-empted world rights to a pirate adventure novel by Eli Brown called Cinnamon and Gunpowder. Brown won, in 2008, the Fabri Literary Prize (established in 2006) for his novel The Great Days. (The prize aids in helping authors get their work published, and Brown's novel was later released by the indie California press Boaz Publishing.) The new novel, subtitled Owen Wedgwood's Adventure at Sea with Pyrates Including the Strange Banquets Made at Gunpoint, was sold by Laurie Fox at the Linda Chester Agency. Fox said the book, which features culinary themes, was pitched as a cross between Chocolat and Pirates of the Caribbean.

A version of this article appeared in the 05/02/2011 issue of Publishers Weekly under the headline: Deals: Week of 5/2/11
TOC
ADVERTISEMENT
More from pw