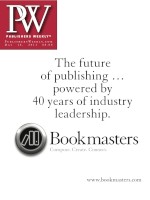 A New Balance of Power: After the Google Book Settlement

In a wide-ranging webinar discussion on May 10, "What Comes After the Google Book Settlement," a panel of experts said they expected some adjusted form of the settlement to emerge from Judge Denny Chin's rejection of the book settlement on March 22. Indeed, all the panelists supported Google's original position on fair use—the issue that sparked the litigation and subsequent settlement—and said the fight over the now rejected $125 million class action settlement will likely result in legislation on orphan works specifically and copyright reform in general over the next few years.

Moderated by PW features editor Andrew Albanese and co-sponsored by PW and Digital Book World, the webinar featured James Grimmelmann, New York Law School; Skott Klebe, from the Copyright Clearance Center; and Pamela Samuelson, University of California–Berkeley Law School and School of Information. Calling the book settlement "not too big to fail," Albanese provided a recap of the long-running dispute, which originally stemmed from Google's scanning of copyrighted works and whether the scanning was fair use, as Google claimed, or massive copyright infringement, as the publishers claimed. Albanese emphasized that the dispute and settlement were ultimately "about control."

Albanese described the Google settlement as a class action settlement that would pay individual copyright owners $60 for each book scanned and require them to "opt-out" of the agreement if they objected to it (rather than choose to opt-in); it also set up a massive new rights registry to monitor and dole out payment.

While panelists all seemed to believe that Judge Chin would have liked to approve the settlement, they said the proliferation of objections from nearly every party affected—during the 2009 fairness hearing, 21 out of 26 speakers were against it—forced the rejection. "He left little doubt that the settlement was heading into legal terra incognita," Grimmelmann said of Chin's decision. "He could have pushed precedents to make it happen, but after looking at the objectors, he said no."

Panelists were also all in agreement that, as Grimmelmann noted, "Google had a strong fair use argument." "If Google had pursued litigation, they would have had a good shot at winning," Samuelson agreed.

But the panel cited the opt-out feature as well as questions surrounding orphan works—books whose copyright owners cannot be found or identified—as substantial obstacles to approval. In addition, the panel cited the explosive growth of the e-book market over the past few years, suggesting that this is likely to have affected Chin's decision. "Originally, one author I know was just happy to be paid anything," said CCC's Klebe. "Now he's releasing e-books and making money, so I think the settlement underpriced e-books. I think the e-book market shows no one is waiting on the settlement."

So after years of public and legal debate, Albanese asked, does the failure of the settlement matter? The panelists suggested that the dispute had highlighted issues critical to the future of digital publishing and moved the discussion forward. Samuelson said the debate has made publishers think of "new products and the viability of a digital public library. Part of what Google has done is make people think bigger." Klebe said the settlement dispute "put a clear face on the orphan works problems, the value they have for the market, and what reforms are needed to unlock access to those books."

"It's time to talk about general copyright reform," Samuelson said. "The [U.S.] Copyright Office is the best entity to find out what the parties want and what may be a good model for legislation. Google is in a strong position on fair use and the publishers are not interested in further litigation. Chin wants a new settlement with an opt-in for out-of-print books." Klebe agreed, emphasizing, "There's a new balance of power between all the parties and interests."

Grimmelmann summed it up: "It's in everyone's interest to settle this. I expect it to be settled and to see orphan work legislation by 2014."

A version of this article appeared in the 05/16/2011 issue of Publishers Weekly under the headline: A New Balance of Power: After the Google Book Settlement
TOC
ADVERTISEMENT
More from pw