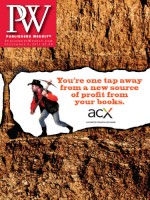 With sales of digital content and its Nook line of reading devices and accessories surging and its print business showing signs of stabilization, Barnes & Noble reported its best quarterly report in some time last week, as total revenue in the first period rose 1.6%, to $1.42 billion, and its net loss was trimmed to $56.6 million, from $62.5 million. With total digital sales expected to double for the full fiscal year, B&N projected that revenue in the current fiscal year will reach $7.4 billion, a 7% increase over fiscal 2011, and EBITDA (earnings before interest, taxes, depreciation, and amortization) will rise 30%–50%, to between $210 million and $250 million.

Much of the profit improvement will be due to better results at BN.com. The fastest-growing segment of its business, the online division’s sales rose 36.8%, to $198 million in the quarter, and its operating margin jumped to 21.0%, from 3.7% a year ago. B&N CEO William Lynch said in the quarterly conference call that the margin improvement shows that BN.com’s business is scalable and should continue to improve its profitability as sales grow. The margin improvement in the quarter was due to a combination of higher sales of more profitable digital content and better margins from the sale of Nook hardware products. Sales of digital content through BN.com quadrupled in the quarter, and B&N estimated it has a 26%–27% market share of e-book sales and a 30% share of the digital magazine market. The majority of e-book sales are made through the agency model and B&N’s self-publishing platform, PubIt! By the end of fiscal 2012, B&N projected that digital/Nook sales will represent about 24% of total revenue compared to 12% in fiscal 2011 (and 2% in fiscal 2010).

Sales through B&N’s retail trade bookstores fell 2.5% in the quarter and comps were down 1.6%. Lynch said the decline in print book sales slowed in the quarter, while sales of educational toys and games had solid gains. The trade stores also benefited from the 200 stores that Borders had already closed, with CFO Joe Lombardi estimating that B&N picked up $18 million in business in the quarter from former Borders customers. The company believes it will generate an extra $150 million to $200 million in sales because of the collapse of Borders, a figure that could be between $300 million and $400 million on an annual basis.

B&N, however, has no plans to embark on a major store-opening program and, at most, will take over a few Borders locations. B&N currently has 704 superstores, closing one outlet during the quarter, and Lombardi said it is likely B&N will continue to close about 10–15 stores on an annual basis. And although there are no plans to accelerate that closing rate, with an average of 100 leases up for renewal each year, B&N has lots of flexibility to manage its physical footprint, Lombardi said. Still, the immediate prospect for the stores is positive. Comp sales through the superstores are expected to increase 2% to 3% for the full year, aided by the demise of Borders and strong sales of toys and games. Without Borders, Lynch was confident this year’s holiday customer traffic at B&N stores will be the highest in more than five years, and the company will look to add more educational toys and games to its mix before the start of the holiday season. While toys are a huge opportunity, Lynch said B&N has no intention of competing with Wal-Mart by selling a wide variety of toys or toys as loss leaders. “We have no plush [toys],” Lynch observed.

Asked whether, with the loss of Borders, B&N has talked to publishers about receiving better discounts, Lynch said the company is always revisiting its relationship with publishers and will continue to talk to them, but there was no change in terms in the first period.

A version of this article appeared in the 09/05/2011 issue of Publishers Weekly under the headline: Cashing In
TOC
ADVERTISEMENT
More from pw