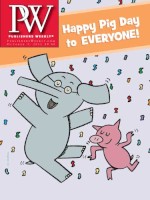 A Whole Lot of Reading Going On

In 1999 San Francisco authors/journalists Jane Ganahl and Jack Boulware mused over drinks about getting together a bunch of authors for a big reading. They tapped Phil Bronstein, the editor of the San Francisco Examiner, to foot the $300 bill for 25 authors to read in Golden Gate Park for what they called Litstock.

Now renamed Litquake, it is both an annual week-long-plus fall book festival in San Francisco and a nonprofit that runs a year-round series of book events that features close to 1,000 authors with a $300,000 operating budget. This year’s book festival, October 7–15, will feature 850 authors in 76 venues, ending with its signature Lit Crawl, a bar-hopping event. (Litquake recently expanded its Lit Crawl franchise, hosting such events in New York and Austin, Tex.)

“We never thought it would last more than a year,” said Boulware. “But people were clamoring for it,” said Ganahl. The 2010 festival drew more than 13,000 attendees.

The goal of Litquake, the cofounders said, is to create a dynamic series of book activities that bring together authors and readers in both traditional and creative, sometimes edgy ways. Instead of booths—a book festival staple—Litquake stages events in San Francisco laundromats and barbershops as well as in theaters and bookstores. This year houseboats in Sausalito—where Otis Redding wrote “Sitting by the Dock of the Bay”—have been enlisted to host Litquake events.

Litquake’s willingness to be imaginative is largely cause for its success, said Hut Landon, executive director of the Northern California Independent Booksellers Association. “What has been fantastic about Litquake,” he said, “is that it has really involved and connected the entire book business in San Francisco—authors, publishers, booksellers, and readers.”

“The process of growing Litquake was as creative as the subject matter of Litquake—literature—is creative,” said Bronstein, who serves on its advisory board.

Both Bronstein and Landon admire how Litquake—unlike other festivals with significant newspaper or corporate sponsors—has managed to raise enough funds from numerous sources to support itself. Boulware and Ganahl are now officially employed by Litquake part-time. “It’s pretty impressive how they get that money a dollar at a time,” said Bronstein. “It’s this gigantic event, and everyone has a good time.”

The creative mix of events and variety of authors contribute to the festival’s success. This year’s headliners include James Elroy, Chelsea Handler, Thomas McGuane, and Ishmael Reed, the last receiving the 2011 Barbary Coast Award. But there are plenty of slots for up-and-coming writers. Humor is a big part of the mix. As Boulware asked, what other lit event includes serious poetry and an evening with wrestling books, with NWF wrestlers in spandex? Events range from free to $100. This year Litquake is holding its first teen writing contest.

“So many people tell us they decided to become a writer because they came to a Litquake event,” said Boulware. “In the past few years, people have told us they plan their [San Francisco] vacations around Litquake,” said Ganahl. It is the one quake that does not keep wary outsiders away.

A version of this article appeared in the 10/03/2011 issue of Publishers Weekly under the headline: A Whole Lot of Reading Going On
TOC
ADVERTISEMENT
More from pw