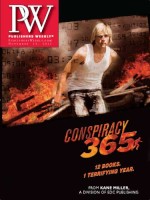 Sarah McGrath at Riverhead signed her award-winning author Chang-Rae Lee to another book, buying world rights to a forthcoming untitled novel. ICM agent Amanda “Binky” Urban brokered the deal for Lee (Native Speaker), who teaches in the creative writing program at Princeton and has won numerous awards, including a PEN/Hemingway and this year’s Dayton Literary Peace Prize. The novel is scheduled for 2013.

Ecco’s Libby Edelson took North American rights to Mary Doria Russell’s novel The Cure for Anger, in a deal handled by Jane Dystel at Dystel & Goderich Literary Management. Anger is Russell’s follow-up to her lauded 2011 novel about Doc Holliday, Doc, which Random House published in May. In Anger, Russell picks up where Doc left off, probing further the complex relationship between Holliday and his famous lawman friend, Wyatt Earp. According to Ecco, the novel examines “the willful, emotionally brutalized women they loved, and the cast of ruffians and heroes who found themselves summoned by history to Tombstone, Arizona, to participate in or witness a three-minute gunfight that to this day resonates in our national consciousness.”

In what’s rumored to be a six-figure deal, Jon Agee has signed a world rights, three-book contract with Dial Books for Young Readers. The author/illustrator’s Little Santa, and two other books were acquired by Lauri Hornik, president and publisher at the imprint, from agent Holly McGhee at Pippin Properties. Little Santa is scheduled for fall 2013. Agee is the author of a number of iconic and celebrated picture books, including Ludlow Laughs and The Incredible Painting of Felix Clousseau.

In another major children’s deal, Margaret Raymo at Houghton Mifflin Books for Children bought world rights to Son, the fourth title in Lois Lowry’s canonical YA series, the Giver Quartet. Phyllis Westberg at Harold Ober represented the Newbery-winning Lowry, who, according to HMH, has sold more than 11 million books. The first book in the series, The Giver, came out in 1993 and won the Newbery Medal the following year; it follows an 11-year-old named Jonas living in a futuristic utopian society that evolves into a more dystopian world. Gabriel, a central character from the series, who also appeared in that first book, is the subject of Son, which introduces readers to his mother. (In The Giver, Gabriel is an orphan who is raised by Jonas’s family.) The Son is scheduled for fall 2012.

LBYR Moves In with Zarr and Altebrando

National Book Award finalist Sara Zarr, writing with fellow YA author Tara Altebrando, sold world righs to a YA novel, Roomies, to Julie Scheina at Little, Brown Books for Young Readers. Michael Bourret at Dystel & Goderich, who represents Zarr, brokered the deal with David Dunton at Harvey Klinger, who represents Altebrando. The authors became friends after connecting on MySpace in 2006, discussing the writing life and their mutual affection for each other’s work. Roomies is their first collaboration, and LBYR said the work is a “story about leaving home.” The novel is set for fall 2013.

Keith Kahla at Macmillan’s Minotaur imprint closed a two-book, world English rights deal with Norwegian author Jørgen Brekke, buying the his 2011 Norwegian bestseller, The Realm of Grace, as well as its sequel. Nicole James at Aaron Priest handled the deal on behalf of Gyldendal Norsk Forlag. Realm is Brekke’s debut, and rights to the thriller, about the investigation of a set of violent murders in the U.S. and Norway, which are related to a 16th-century crime, have sold in 11 countries outside of Norway.

Christin Pride at Hyperion’s Voice imprint pre-empted North American rights to Torre DeRoche’s Love with a Chance of Drowning from agent Elizabeth Evans at the Jean V. Naggar agency. In the book, DeRoche writes about meeting and falling for an Argentinian man while visiting the States on a year-long stint from her native Australia. When DeRoche finds out this tall, dark, and handsome stranger is about to set sail on an around-the-world trip, she impulsively decides to follow her heart and join him. The book was originally self-published under the title Swept, and Voice is planning a May 2013 release.

A version of this article appeared in the 11/14/2011 issue of Publishers Weekly under the headline: Deals
TOC
ADVERTISEMENT
More from pw