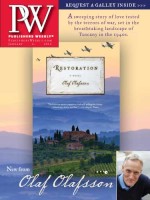 In Dust to Dust: A Memoir Benjamin Busch, son of novelist Frederick Busch, tells of his life drawn to sports, physical activity, and the military despite growing up in a literary family.

What inspired you to structure your story around elements rather than chronologically?

I don’t see memories as linear or chronological. They move by free association, visual and emotional cues that guide us into narratives. Though they may seem random, we follow streams, and a structure emerges. Here I chose elemental themes to provide that structure. I wanted a design born of the way we remember, speaking to the past but from our expanding orbit around it.

Your childhood was so focused on the natural world yet your time in the Marines seemed to be the complete opposite: a manmade conflict.

Digging in soil literally grounded me in the elements, and my exploration of a nearby river and forest introduced me to wilderness. My mother was a gardener, and there was great encouragement to nurture growth and connect with the natural world, but I did not apply the rise and decline of life in the garden to myself, or to my parents, at the time. The military introduced me to a relationship with metal in rifles, knives, bullets, and ships. I was instructed that the environment was a threat. I was still drawn to the natural surroundings in military training grounds and Iraq, but I was far more attentive to evidence of man. There is a truth to both views of our environment, and I needed to have both to understand Mother Nature and human nature.

You say that your father, a novelist, had “chosen words over war.” Do you think you chose both?

Wars are usually the result of the failure of language, incomprehension. I had done little reading and almost no writing before the invasion in 2003, but I grew up in a house of words so I knew to respect writing. I knew that choosing words was worth whatever time it took to find the right ones, and I knew that there were consequences for picking the wrong ones. When I was in Iraq, writing was what I had and I began to use it to describe my experience and explain war as I learned it. This book began then. Unlike my father, I needed the war to find the words.

As a writer, having worn physical armor both on the high school football field and the battlefield, do you think words have the power to form their own protective barriers?

Unfortunately, that armor failed me on both fields. I don’t think words make good barriers. In describing so much of my life, I am inviting everyone into me. I am removing protection, and in doing so, I have fewer secrets to defend. That is what deep memoir does. There is some confession of vulnerability, exposure of my own imperfection, some witness to mortality, and much hope that none of it is true. This book is a treatise on perpetuity with an awareness of both transience and destruction. It is about a lifetime of last words and how they echo. This is my story and my last letter to my parents, who can never read it.

A version of this article appeared in the 01/02/2012 issue of Publishers Weekly under the headline: Staring Down Mortality: PW Talks with Benjamin Busch
TOC
ADVERTISEMENT
More from pw