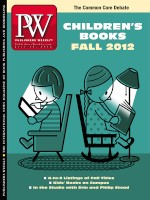 Children's Books for Fall 2012: All the Listings and Features

Summer may be in full swing, but here at PW our thoughts have already turned to fall and our comprehensive listings of the coming season’s offerings. With this issue we shift our parameters a bit; our fall announcements now encompass July 1, 2012, through January 31, 2013. But before you pore over the list, check out our features section. We take an in-depth look at the Common Core State Standards—what they are, how they came about, and what they mean for publishers. Campus booksellers tell us how children’s titles are doing at their stores, and what creative tactics they’re employing to boost sales. Caldecott-winning power couple Erin and Philip Stead invite us into their studio to discuss how they produce their work and what success has taught them. Happy reading!

Click the links below to go to the listings:

And here are the features:

What Common Core Means for Publishers

About Our Cover Artist

Though Stephen Savage had always intended to make picture books, success as an editorial illustrator (clients include the New York Times, the New Yorker, and Rolling Stone) delayed those aspirations for a number of years. He’s fully on track now, though: his fourth picture book, Little Tug, comes this October, and no fewer than four more are in the works. Among the artists he counts as influences: Crockett Johnson, Feodor Rojankovsky, and Leonard Weisgard. Even when doing editorial work, he says, “children’s books were always inspiring the look of my illustration.” And now, he feels, “I have this mission to do them.”

A version of this article appeared in the 07/16/2012 issue of Publishers Weekly under the headline:
TOC
ADVERTISEMENT
More from pw