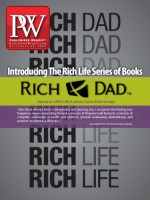 Since the launch of the Kobo Writing Life (KWL) self-publishing platform in the summer of 2012, the service has grown quickly and now generates about 10% of Kobo’s unit sales. The growth is also international; Writing Life authors publish works in 138 countries and in more than 50 languages. “The growth in sales has far surpassed our initial vision of what our first year would be like,” said Mark Lefebvre, Kobo director of self-publishing and author relations. Lefebvre said that Kobo’s top-50 bestsellers list usually includes five to eight KWL titles at any given time and that “there are KWL authors moving on to conventional publishers because they can prove they have a book that people want to read.” Lefebvre also noted that KWL launched with a staff of two (not including himself) and now has seven, including managers overseeing works coming from the U.K., the U.S., and Europe.

Kobo Writing Life allows anyone to upload a book to the Kobo platform, which will then make it available to a global audience. Books can be published in any language via the general Kobo store, and the KWL portal has six “localized” e-bookstores (English, Dutch, French, German, Italian, and Spanish) that also carry self-published titles. English, French, German, Italian, and Spanish represent the languages with the most KWL titles. “Kobo authors are selling books all over the world,” Lefebvre said.

The service has undergone several upgrades since its launch, including a WYSIWYG text editor feature that lets authors preview their books and allows for quick corrections and updates. (Lefebvre said the text editor makes it easy for KWL authors to add links at the end of books pointing to the next in the series.) And corrections, Lefebvre said, propagate relatively quickly through the system (he said they take effect in 24 to 72 hours). KWL also offers a dashboard that provides data on sales by region, as well as estimated earnings. In addition, KWL recently enabled preordering for e-books, a much-desired feature that allows authors to set release dates and accumulate orders (orders for a given title aren’t processed until its release date); Lefebvre emphasized that these pre-orders can be used to boost a title’s ranking on Kobo’s bestseller list.

That said, KWL allows authors to give away titles for free, and savvy authors are using “strategic giveaways” to convert readers from free to paying customers. “They’re using good metadata and linking books in a series,” Lefebvre said, noting that the books have to be good to make this strategy work. “But we’ve seen real conversions.” Kobo is also at work on an upgrade to the dashboard, Lefebvre added, that will give KWL authors the ability to track free downloads to find where the readers are coming from.

Because of Kobo’s partnership with the American Booksellers Association, KWL authors in some regions are able to hold in-store events for their e-books—since the indie stores can sell e-books as part of the deal. Jan’s Paperback in Aloha, Ore., has an event scheduled for November (with an e-book and Kobo device giveaway included), and Christine Munroe, KWL U.S. manager, is working on other events.

Lefebvre said that KWL is attracting “hybrid authors”—writers who have been conventionally published and also self-publish, such as romance writer Bella Andre (who was part of the launch of KWL), horror author Steve Vernon, and fantasy novelist Lindsay Buroker, among others. Vernon, who has 30 books on KWL, has a midsized conventional publisher, Lefebvre said, but also releases two or three books a year via KWL: “His publisher can’t keep up, so he self-publishes a series of novellas.”

Lefebvbre noted that KWL has removed a lot of the barriers that prevent writers from reaching readers directly, and the authors who do best are the ones “who treat KWL like a business.”

A version of this article appeared in the 09/23/2013 issue of Publishers Weekly under the headline: Kobo Writing Life: A Year Later
TOC
ADVERTISEMENT
More from pw