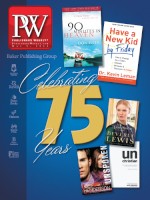 Eight Twenty Eight: When Love Didn’t Give Up

This is a most unconventional marriage book. The Murphys are a young couple who married in 2010, four years after a car accident left Ian Murphy with a catastrophic brain injury. Larissa sticks with Ian, even moving into his family home once he is sufficiently stable and comes home from the hospital. The book is a record of an extraordinary yet real relationship more than it is a strict recounting of events. Present and past time frames shift a little confusingly at certain points, but Larissa is a good writer and unsparingly honest about the emotional demands of transforming everyday, unremarkable love into love for someone with brain injury. The faith elements in the book are strong yet completely organic. A reader doesn’t need to know the title’s biblical reference (Rom. 8:28) to see that all things can somehow work for the good, given enough faith, love, time, and rehabilitation. (Aug.)

The Grace in Aging: Awaken as You Grow Older

Singh (The Grace in Dying) examines aging in an attempt to reframe the way this stage of life is viewed. Rather than a time of loss and diminution, aging brings the titular “grace” of a chance to become more self-aware and be ready to move offstage and make room for the next generation. Singh is a psychotherapist with insight, but her insights are unfortunately lost in vague prose. Buddhist teachers and writers often tell stories to illustrate and give the reader an imaginative approach to sometimes paradoxical ideas, but those illustrations are absent here. Singh’s writing is abstract about the need to go beyond abstractions (“We want to thoroughly explore, without preconception, the constant concept churning that has kept us in ignorance.”); concrete examples and practices are needed. Most useful are the questions in the appendix, which should prompt readers to deepen their own understanding of their lives. (Aug.)

We Make the Road by Walking: A Year-Long Quest for Spiritual Formation, Reorientation, and Activation

McLaren (Why Did Jesus, Moses, the Buddha, and Mohammed Cross the Road?), a speaker and former pastor who could be described as a heterodox Christian, gives more conventional versions of that faith another shakeup with this idiosyncratic religious education text. McLaren provides 52 short readings, each of them a short commentary on a Bible passage; each reading ends with an “Engage” section of questions to prompt reflection, discussion, or activities. While the book can be used by individuals, McLaren’s ideal audience is groups. He calls them “learning circles” and pictures them getting together over convivial dinners to use the texts; an appendix provides liturgical resources for developing more formal or quasi-worship gatherings. In a postdenominational religious culture, many who are interested in matters of faith are uninterested in what they can find on the ready-to-wear rack of religion offered in conventional churches, and McLaren hopes to provoke and engage those seekers. His usual Christian critics will simply be provoked. Agent: Kathy Helmers, Creative Trust. (June)

The prolific Collins (Music for Your Heart: Reflections from Your Favorite Songs) is also the official biographer of Lassie, so he’s in his element with this collection of stories about dogs doing great things in a variety of circumstances, from performing service in wartime to saving their owner’s lives. A few stories are moving: a dog training program in prisons pairs shelter dogs with inmates, with both canine and human gaining dignity in the process; a service dog who guides her blind owner out of World Trade Center Tower 1 on Sept. 11, 2001, is remarkable. But Collins often tells far more than he shows (“The glowing faces of the children living in this natural paradise showed excitement and hope as they built snowmen”), and too many dogs sound too much like Lassie clones. Still, many dog people will likely bite on this, and the dog on the cover has a very handsome face. Agent: Joyce Hart, Hartline Literary Agency. (June)

★ Fly a Little Higher: How God Answered a Mom’s Small Prayer in a Big Way

Sobiech is a member of a select group no one wants to join: mothers whose children have died. She chronicles her teenage son Zach’s struggle with osteosarcoma. As he was dying, Zach, a musician, wrote a song, “Clouds,” that got both popular and music industry attention, leading to a short documentary about him and a celebrity music video of his song, the two videos together attracting more than 16 million YouTube views. Sobiech’s story is about her son, but also about her family, their faith, and the process of facing death. The elements more than resemble the wildly popular YA novel The Fault in Our Stars, but this story is true. Sobiech’s talent as a writer and love for her son are obvious. Her details ring true, not treacly, and the power of the book lies in its understatement of the faith and emotion, both of them strong, that course through the story. Keep tissues near. Agent: Jacquie Flynn, Joelle Delbourgo Associates. (May)

A version of this article appeared in the 05/05/2014 issue of Publishers Weekly under the headline: Religion Update Spring 2014: Books in Brief
TOC
ADVERTISEMENT
More from pw