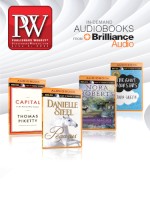 The Plants in Pants: PW Talks with Karen Abbott

In Liar, Temptress, Soldier, Spy: Four Women Undercover in the Civil War, Abbott shares the stories of four daring women who defied their gender roles to support their respective sides.

Of the four women in your book, was there any particular one you especially connected with?

I have to say there were two, but for very different reasons. First, Emma Edmondson, because I thought what nerve it took for her to disguise herself as a man and enlist in the Union Army—and the daily threat of being discovered and what that would mean. She struggled, not only by acting as a man in the army and all of the danger that entails, but because she developed feelings for her fellow soldiers and wasn’t able to act on them in a way that was satisfactory to her. She felt at the same time very trapped, vulnerable, incredibly brave, and strong to me, and I was really interested by those contradictions in her.

And, then, second, Belle Boyd. I just think she was so awful and insane. All of these men talk about how charismatic she was and fell in love with her. She seduced generals on both sides with reckless abandon and accomplished all this without being beautiful. Nobody seemed to understand what it was about her, yet she managed to overpower everything and everyone in her path. I admired her voracity.

Were there other undercover women during the Civil War that you came across in your research? Was there a reason you chose these four?

The number one reason is I wanted four different people coming from different perspectives that would weave a tapestry: the story of the Civil War from the eyes of these women as nobody’s really seen it before. I also wanted stories that intertwined in some ways. It was important to me that even if they weren’t physically interacting—though, of course, Belle and Rose do at some point—they were running into the same people.

What surprised you the most in your research?

I had no idea that women disguised themselves as men and enlisted in the army. What I found really fascinating was how they got away with it. It was not only that all the soldiers went to bed fully dressed, so it wasn’t odd that the woman wasn’t stripping down to her linens, but it was that fact that no one knew what a woman would look like wearing pants. They were just so used to seeing women in crinolines and bonnets and these big flowing dresses that the idea that a woman would actually put pants on was so unfathomable that they just had no idea—and that’s how they got away with it.

You’ve previously written about unconventional women in history (Sin in the Second City; American Rose), is there something in particular that draws you to these special women?

The short answer is I like to write about women whose lives I wish I lived. At my core, I’m jealous of all of them. And writing about them is the next best thing.

A version of this article appeared in the 06/02/2014 issue of Publishers Weekly under the headline: The Plants in Pants: PW Talks with Karen Abbott
TOC
ADVERTISEMENT
More from pw