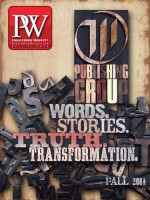 LBYR in Global Deal for YA Debut
Alvina Ling, the executive editorial director at Little Brown Books for Young Readers, bought U.S. rights to Dawn Kurtagich’s debut YA novel, The Dead House, as part of a two-book deal. The psychological thriller was also acquired, simultaneously, in the U.K. by Jenny Glencross at Indigo (Orion’s YA imprint). Greenhouse Literary’s Sarah Davies orchestrated the U.S. sale, while Polly Nolan handled the U.K. one. Dead House, which is set for fall 2015, is about the discovery of a diary in the ruins of a high school that burned down a quarter-century earlier. The diary was written by the twin sister of a student who disappeared in the fire. LBYR said the novel is a “dark and compelling tale of lies, mystery, and deceit that will keep readers guessing until the very end.” The second book in the deal is currently untitled and unscheduled. Kurtagich, who lives in Wales but grew up in Africa, writes for YA blogs and is a member of the YA League.

Scrooge Gets His Mugshot at Gallery
Natasha Simons at Simon & Schuster’s Gallery Books took North American rights to LJ Oliver’s The Humbug Murders. Inkwell Management’s Charlie Olsen represented the authors; Olsen said the novel is a “playful mystery” and the first in a series that sees a young Ebenezer Scrooge framed for murdering his friend, Fezziwig. Scrooge works with a mysterious woman named Adelaide to clear his name, getting help from an array of literary figures (some fictional, some real) such as Miss Havisham and an ambitious young reporter named Charles Dickens. LJ Oliver is a pseudonym used by a bestselling author and his collaborator; Olsen said that the more famous half of the duo has written over 90 novels (spanning adult and YA), and his partner studied criminology and journalism in the U.K. The Humbug Murders will be released in fall 2015.

Putnam Re-ups Maden, Signs Chase
In the first of two deals coming out of Putnam this week, Nita Taublib took world rights to two new novels in Mike Maden’s Drone series. Putnam launched the series with Drone in October, 2013; the story follows former CIA operative Troy Pearce who, with his team, works on operations of their choosing, targeting enemies through the use of drone technologies. David Hale Smith at Inkwell Management brokered the deal with Taublib.
In the second deal, for two books, Tara Singh Carlson picked up North American rights to Eve Chase’s debut, Black Rabbit Hall. Kim Witherspoon and Allison Hunter at Inkwell handled the sale, on behalf of David Higham Associates. Putnam described the novel, which is set at the titular country estate, as “Kate Morton meets Daphne du Maurier.” The estate is home to the Alton family, a clan, as Putnam put it, “for whom life will never be the same after tragedy strikes one fateful summer day.” The book is slated for a winter 2016 release.

Briefs
Europa Editions’ publisher Kent Carroll bought world rights to Seth Greenland’s I Regret Everything. Greenland, who was a writer-producer on the HBO show Big Love and is the author of The Angry Buddhist (which Europa published in 2012), was represented by Henry Dunow at Dunow, Carlson & Lerner Literary. The new novel, Europa said, is a “true-hearted account of a tragic love affair” that follows Jeremy Best, a lawyer by day and poet by night, as he falls for the daughter of his boss. I Regret Everything is set for release in winter 2015.

A version of this article appeared in the 07/07/2014 issue of Publishers Weekly under the headline: Book Deals: Week of July 7, 2014
TOC
ADVERTISEMENT
More from pw