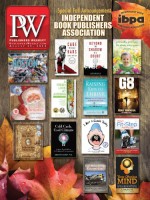 Already dominant in the Japanese market, Haruki Murakami further solidifies his position as a star in the U.S. with Colorless Tsukuru Tazaki and His Years of Pilgrimage, this week’s top seller on our Hardcover Fiction list. With more than 21,000 copies sold at outlets that report to Nielsen BookScan, Tsukuru’s success out of the gate echoes that of Murakami’s 1Q84, which sold 30,000 copies in its first week in October 2011. (In Japan, readers camped out overnight for Tsukuru, and more than 1 million copies were sold in the opening week). The new book, much shorter than the nearly 1,000-page 1Q84, is reminiscent of Murakami’s earlier work—Norwegian Wood and A Wild Sheep Chase in particular—and follows a lonely middle-aged man sifting through buried memories and reconnecting with people from his youth to understand the mysterious disappearance of a friend. Though his prose style is divisive, especially in discussions of Western influences on Japanese literature, the author is rumored to be a fixture on long-lists for the Nobel Prize in recent years, and has already won a host of international awards, such as the Franz Kafka Prize in 2006 and the Jerusalem Prize in 2009. With his latest title, Murakami continues to edge further into the conversation for literature’s most prestigious award.—Seth Satterlee

First published in 1969, Business Adventures by the late New Yorker contributor John Brooks was, up until last month, nearly impossible to find. Open Road Media picked up rights to the work from Brooks’s estate, releasing the title as an e-book on July 8. Days later, the Wall Street Journal ran a piece by Bill Gates in which the Microsoft founder touted the book, a collection of essays on corporate life in the U.S., as the “best business book [he’s] ever read,” and Brooks as his “favorite business writer” and a “masterful storyteller.” Open Road’s e-book quickly climbed Amazon’s Kindle bestseller list and hit #2 on the New York Times nonfiction e-book bestseller list. The publisher met the demand for a physical copy of the collection, long out of print (an edition from 1969 was, at press time, listed on eBay for $1,895), with the release of a paperback on August 12, which hit #4 on our Trade Paperback list, moving nearly 14,000 copies in its first week on sale. “That’s the power of Bill Gates,” Jane Friedman, Open Road CEO, said, adding how satisfying it is to “bring the great back to life.”—Clare Swanson

The Best Yes: Making Wise Decisions in the Midst of Endless Demands by Lysa TerKeurst debuts at #3 on our Trade Paperback list, with sales of more than 14,000 copies. TerKeurst, president of Proverbs 31 Ministries, which reaches hundreds of thousands of women globally, has been to the bestselling mountain before with Made to Crave and Unglued. Her latest, which tells women it’s okay to say no sometimes, promises help for the stressed and overcommitted, a message that resonates regardless of religious persuasion. With her books, TerKeurst is helping to fill the vacuum left by Oprah Winfrey, who offered empathy to masses of women via her TV show platform. PW said in its review of The Best Yes: “TerKeurst’s gentle approach reads like a friend commiserating and counseling over lattes.” The author’s considerable online presence helped to build prelaunch buzz: preorders were promoted with offers of gifts and free downloads. Related products—a curriculum and online Bible study—facilitate use by groups. “The magic on the marketing side was the teamwork between the author and publisher,” said Chad Cannon, v-p of marketing for Nelson Books. “The collaboration between the two teams was the driving force in having such a strong launch.”—Marcia Z. Nelson

Drunken YouTube shenanigans can go a few different ways. Most videos languish in obscurity; a few earn their stars fleeting viral infamy. And then there’s Hannah Hart. In 2011, when she was 24 years old, Hart posted a video in which she attempted to prepare grilled cheese while downing glasses of wine. The vignette nabbed 100K page views in its first few days online, leading to a web series and a dedicated channel with nearly 1.5 million subscribers. This week, the spinoff book, My Drunk Kitchen: A Guide to Eating, Drinking & Going with Your Gut, lands at #3 on our Hardcover Nonfiction list. Sporting blurbs from Hart’s teenage sister and Neil Gaiman (“I defy anyone to read this surprisingly useful book and not come away from it madly in love with [Hart]”), and a foreword by John Green, who appeared with Hart in a 2013 webisode called “Pizza John.” My Drunk Kitchen is not a cookbook. It’s part self-help guide, part BFF-style pep talk. It’s the kind of book a reader might turn to for a commiserating laugh when, for example, enduring the scenario on p. 115: “Eating Alone: Why Am I Always?? (Meals portioned for one person to eat while standing over the sink).” —Carolyn Juris

It’s been three years since the release of Lola and the Boy Next Door, the follow-up to 2010’s Anna and the French Kiss by Stephanie Perkins. On August 14, Isla and the Happily Ever After, Perkins’s concluding novel in a loosely connected YA trilogy about a group of friends who court adventure and romance in faraway places, was released; it debuts at #23 on our Children’s Fiction list. Dutton came up with a multipronged marketing blitz, which included a pre-order campaign, giveaways of buttons and decals to anyone who placed a pre-order, and bookstore giveaways of tote bags designed by the author, to get readers more actively involved. A sampler of the first five chapters was posted online on June 2, and Goodreads hosted five galley giveaway contests. To reach Perkins’s online followers, a team of 30 superfan bloggers, grouped under the hashtag #ReadISLA, rolled out extensive coverage and activities. Perkins joined in the fun too, though she’s a self-proclaimed introvert who refers to herself as “the worst self-promoter.” She has been active on Tumblr, Twitter, and her blog, and, this fall, will appear at no fewer than five book festivals, including the Texas Book Festival and YALLFest, to spread the word about Isla. —Alexis Burling

A version of this article appeared in the 08/25/2014 issue of Publishers Weekly under the headline: This Week's Bestsellers: August 25, 2014
TOC
ADVERTISEMENT
More from pw