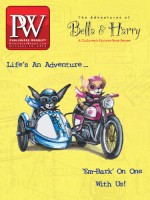 What preconceived notions about Mormons do you hope that readers will reevaluate after reading The Bishop’s Wife?

I think the biggest misconception now is that Mormon women are oppressed, forced to stay home and have big families, and that we are submissive and rather boring as a group. So that’s why I created Linda Wallheim. I wanted to make a “regular” Mormon woman the heroine of the story and show the ways that so many of the Mormon women I know are smart, savvy, and creative, and exercise all kinds of power in ways that are traditional and that may be overlooked but are definitely real.

Like your protagonist, Linda Wallheim, you’ve suffered the loss of a daughter. Did you find writing this book to be a cathartic experience in any way?

Writing was my one sanity for a long time after that terrible loss. It has taken me many years to get to a place where I could talk about not just the horrible pain and the loss of faith that I experienced but also about the lessons I’ve learned along the way. I spent some time sitting in meetings after I gave up believing in God and translating what other people said into something that made sense even if you didn’t believe in God. I think that this unique experience allowed me to make sense of Mormonism to non-Mormon readers in a way that maybe no other writer could have done.

How was writing The Bishop’s Wife different from writing YA books?

While I love the tightness of YA writing, it was nice to have a protagonist think a lot and ponder life in general. Linda is very philosophical, and there is a lot about Mormonism that I don’t think would work in the YA book world because it might feel either didactic or proselytizing.

Is there a series planned featuring Linda and the other people in her ward?

I already have book two under contract and have been through one round of revision with my editor. But I have rough drafts of several other books in the series, and have planned in my head an arc for Linda’s development as a character up to a certain point. I wanted to get that set in place before the first book came out because I don’t want media attention, and in particular the comments of other Mormons around me, to influence the story I have in mind for her.

A version of this article appeared in the 10/13/2014 issue of Publishers Weekly under the headline: A Regular Mormon Woman: PW Talks with Mette Ivie Harrison
TOC
ADVERTISEMENT
More from pw