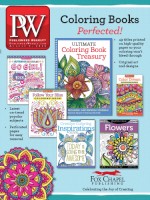 More than a decade after Debbie Stoller’s Stitch ’n Bitch (Workman, 2000) and books like it stoked a knitting resurgence among the young and hip, hobby and craft publishers continue to refine their target readership.

Is the typical crafter a needlecraft traditionalist, drawn to mainstays like knitting and quilting? A sustainability-driven maker intent on fabricating everything from wearables to electronics? An aspirationalist seeking stories as much as instruction? A budget-conscious dabbler? Or an expert willing to spend big on books offering sophisticated design inspiration? And who is defined as a hobbyist anymore?

Last things first. For retailers, the distinction between hobby and craft can allow for more organized shelving: needlework and papercraft fit snugly in the Craft section; coding and sophisticated Lego construction, if defined as a hobbies, can be tucked into Technology and Architecture. But some stores are beginning to avoid the hobby designation altogether.

“The line between what makes a hobby and what makes a craft is becoming less defined as more and more people are looking for creative and challenging activities,” says Mary Amicucci, v-p of adult trade and children’s books at Barnes & Noble. “The idea of finding a hobby to occupy downtime may be secondary to the idea of exploring ideas that give joy and fulfillment.”

The relevance of such classifications may be waning among editors, too. “Hobbyist isn’t part of the language we use when we talk about the craft market,” says Carolyn Mandarano, senior managing editor at Taunton. “Ten years ago, there were dedicated hobby stores, where you could get stuff like model airplanes. It’s all still available online, but the terminology has changed; I don’t know if you need to make that distinction anymore.”

Roost editor Jennifer Urban-Brown agrees. What counts, she says, is “how deeply someone wants to participate in an activity.” She adds, “I see the difference as being between people who are into a high craft tradition [e.g., knitting a sweater in the complex colorwork Fair Isle style], and a DIY audience interested in solid techniques that has ideas for making them their own.” That distinction has implications for pricing: high craft comes in on the high end, around $25 per book; DIY titles are priced at $18 or less apiece.

As in other categories, such as cookbooks, lifestyle is an emerging emphasis for craft publishers. Roost is among the presses that are approaching this theme through storytelling. “We want to give our readers a lot of different ways to connect with our books, whether it’s through the author’s own story, or the idea behind the book, or the way each craft was conceived,” Urban-Brown says. She sees Roost’s upcoming titles as expressing the “core values of the craft movement in ways that people can relate to on a personal level.”

Two Roost books pubbing in September that fit this niche are The Embroidered Garden, which presents embroidery projects inspired by author Kazuko Aoki’s extensive plantings along with her musings on them, and Write Back Soon by Karen Benke, which is part of a trend toward all things handwritten (as is Workman’s Complete Book of Chalk Lettering by Valerie McKeehan and Ulysses’s The Botanical Hand Lettering Workbook by Bethany Robertson, both pubbing in October). Write Back Soon includes note cards that can be personalized, along with prompts for writing longhand to loved ones. Urban-Brown says, “It’s all about encouraging readers to find their own inspiration.”

Narrative also plays a part in some straightforward needle­craft books. Taunton just released two titles in Jemima Schlee’s Take A needlework series, put out by the U.K.’s Guild of Master Craftsmen Publications: Take a Bandana and Take a Tea Towel, each featuring 16 ways to artfully repurpose items into home decorations. With these, Mandarano says, “we’re looking at how craft impacts people’s thoughts about themselves. The projects aren’t only easy; they’re reflections of who these people are.”

Trafalgar Square’s Knit Yourself In by Therese Hagstedt (Oct.) shows midlevel stitchers how to mix Danish “hen knitting” motifs to visually present their personal histories. Sanae Ishida’s Sewing Happiness (Sasquatch, Apr. 2016) is organized by season (i.e., summer: health; fall: creativity) and filled with projects that tie into each chapter’s themes, like yoga pants and camera straps, along with personal essays about the author’s life.

Alongside these more narrative-driven guides, a number of publishers are maintaining a determined presence among “enthusiast” needleworkers of all stripes who are drawn to traditional how-tos offering stitch-up projects of varying degrees of difficulty.

“There’s a continuum here, and a lot more overlap between younger crafters and traditional crafters,” Berti says. “A new generation has discovered the appeal of granny squares and ripple stitches, and is interested in taking them in different directions.”

Mandarano, who sees traditional craft interest being boosted by Taunton magazines like Threads, thinks along these lines. “We’re trying to offer book products that can help crafters of all different experience levels, whether they’re beginners learning to sew a skirt, or [midlevel sewers] who’ve already learned the basics and want to finesse their technique, or the real experienced who just want design inspiration,” she says.

Vital to both editors is backlist potential. Berti looks for books that are “so timeless that new people will eventually discover them.”And Mandarano explains: “We have a huge backlist [of series titles] and it tends to propel the frontlist, and the frontlist brings the backlist along. That cycle opens up a lot of opportunities” for a readership of postcollegiates moving into their first apartments and wanting to “make their own funky window curtains.”

These new crafters are also relevant to the boom in available titles—and to their scope. “The lifestyle element is attracting a younger audience,” says Robert Woodcock, director of North American sales for the U.K.’s Search Press; titles on its docket run the gamut from Sewing for the Absolute Beginner by Caroline Smith (Feb. 2016) to Naomi Okamoto’s Art of Sumi-e (Sept.), a guide to traditional Japanese ink painting. “Societally, there seems to have been a back-to-basics push” that the under-30 set has been quick to embrace.

Woodwork might be the most unexpected craft to see an uptick in interest among the younger demographic, driven by an impossible-to-ignore phenomenon: the maker movement. “It’s getting so much buzz in the press that it’s penetrating to people everywhere they turn,” Mandarano says.

In September, Spring House will release The New Bandsaw Box Book by “drunken woodworker” David Picciuto. “David’s part of a young group of bloggers who are taking the established craft of woodworking and putting a fresh spin on it,” says Spring House publisher Paul McGahren. He notes that by matching completed projects with craft beer recommendations, Picciuto takes a “less-stodgy” approach to a traditional form—one that has attracted more than 73,000 YouTube subscribers. “Most woodworking books are too dense for today’s makers, and this brings more fun to the effort.”

Chronicle is adding to the mix with The Artful Wooden Spoon by Josh Vogel (Nov.), in what Lorena Jones, publishing director of lifestyle and food and drink, calls a response to “a cultural shift that has consumers seeking to create enduring meaningfulness.” Kathleen Campisano, Barnes & Noble’s v-p of toys and games, says that the maker movement is “completely different” from other segments of the craft market. “They’re doing it out of necessity, intellectual curiosity, preservation, and a belief system about how they want to change the world.”

How does that translate into sales? The hobbies and crafts category is up 16% for the first seven months of 2015, compared to the same period last year. But that increase is largely due to the adult coloring book craze (see “Color Me Trendy,” p. 26), which points to yet another expansion of the craft books market. To get back to the question of who the American crafter is, the answer for the moment seems to be: everyone.

Lela Nargi is a Brooklyn journalist whose craft books include Astounding Knits and Knitting Around the World (both from Voyageur in 2011).

Below, more on the subject of hobbies and crafts books.

A version of this article appeared in the 08/03/2015 issue of Publishers Weekly under the headline: Spinning a Good Yarn
TOC
ADVERTISEMENT
More from pw