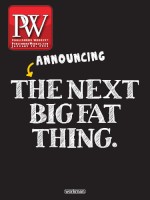 Putting the Cat in a Catalan Love Story

It’s only the first month of the year, but if you’re already looking for a happy ending, Catalan author Francesc Miralles’s novel Love in Lowercase (Penguin, Jan.) will deliver one. And there’s at least two more reasons besides that to buy the American debut of this charming, modest and bestselling author. The story opens on New Year’s Eve with Samuel de Juan, a lonely, middle-aged linguistics teacher in Barcelona going to bed feeling that his life is half over, and that the coming years show little promise for significant change. To his surprise, and to readers’ delight, he soon discovers that small, sometimes unnoticed and often underappreciated events are what make up a satisfying life—thanks to a cat, whose arrival forces him from his doldrums. As the dedication quotes from Robert Brault, “Enjoy the little things, for one day you may look back and realize they were the big things.”

Like the author, the novel’s protagonist immerses himself in words, languages, and dictionaries of obscure meanings. In a serendipitous encounter, however, Samuel rediscovers and attempts to woo his first love, Gabriela, whom he has not seen since childhood. Reason number two to buy the book: if you are looking for an innocent love story, this one is sweeter than a box of Valentine’s Day chocolates.

Finally, Miralles has cleverly built in a third reason to buy the book: the cat, Mishima. Miralles’s first foray into the American market belongs to that oft-successful literary genre kitty lit, in which cat protagonists take center stage. Mishima is the driving force for the story’s chain of events. On New Year’s morning, when he wanders into Samuel’s apartment looking for food, Mishi (Catalan for cat) is the catalyst for bringing together not only Samuel and Gabriela but also Titus, an elderly and eccentric upstairs neighbor and ghostwriter, and Vadlemar, a bizarre patron of the bar Samuel frequents, who always carries his manuscript about the dark side of the moon in his backpack.

All these elements—the happy ending, the love story, the cat—might have devolved into more pedestrian popular fiction were it not for its author, a whimsical writer who seasons his prose with philosophical and cultural references. Miralles, 47, was born and raised in Barcelona, where he’s set the novel. For the past 20 years, he has lived in the Gracia (Catalan for grace), a neighborhood in the shadow of Sagrada Familia, the magnificent basilica built by another native son, Antoni Gaudi.

As the second child of an erudite office worker father and a dressmaker mother who made clothes for women too fat to shop in regular stores, Miralles says he was a shy, retiring boy until his teen years. Then he became friendly with a schoolmate, a punk rocker who introduced him to the underground scene of Barcelona, its music and concerts, its books and magazines. “Part of me is very young adult still,” he says. “My love of the arts is not from a mature, disenchanted vision.”

In his 20s, Miralle’s sensitive nature and conscientious objector status kept him from military service. Instead, he worked in refugee camps in the former Yugoslavia. There he met a man, Boris, considered by some to be the village idiot, but Miralles regarded him as a genius and still visits him every year—Boris became the inspiration for the character Vlademar.

Miralles’s path to a literary career was peripatetic to say the least. Dropping in and out of colleges, he studied journalism, English literature, and German, eventually receiving a degree in the language from the University of Barcelona. Over the years, he has written young adult novels, worked as a translator and a musician, and put in seven years at a publishing house that specialized in self-help titles and books on alternatives therapies. In 2007, he released an album of songs he wrote and played, called Hotel Guru. Currently, his writing career alternates between literature and what he calls “psychology journalism.” In 2009, Maria Tonezzer, an editor in Barcelona and a fan of Miralles’s YA fiction, approached him to write a book for the adult audience—“an intimate story about solitude... a happy family or a happy couple,” he says. But “there’s no story in that,” according to Miralles, and he decided to write a book about a lonely man—and, because both he and Tonezzer love cats (Miralles has two: Billy and Sort, which means luck in Catalan), he gave the main character a cat.

It’s tempting to think that Samuel de Juan is the author’s alter ego, since both the fictional man and the nonfictional man are from Barcelona and both love language, classical music, foreign films, literature, and tea. But, Miralles says, he based the character of Samuel on his father, Marcelle. Another reason Miralles gave Samuel a cat, he says, is because his father always wanted a cat but never had one. “Why write, if you can’t improve on reality?” he asks.

Miralles describes his father as a silent man who rarely spoke to his son and daughter. He listened to classical music, taught himself several languages, and liked to spend his leisure time “correcting dictionaries.” The younger Miralles remembers only one conversation of any length—five or so minutes at most—about the history of the Statue of Liberty, when he was six years old. In Love in Lowercase, the character that most resembles the author, he insists, is Titus, the tortured solitary old man and writer for hire that even on his deathbed still worries about the commissioned work he needs to finish. “I’m afraid I might end up like that,” Miralles says. “It would be good, on one hand, because I’d still be doing what I love. But it would be bad because I’d be working until the end of my days.” Perhaps his American debut will change his fate. “It’s like a dream accomplished to bring this small story set in Barcelona to the biggest market of readers,” Miralles says.

Barcelona, the setting for Francesc Miralles’s novel Love in the Lowercase, is a city of book lovers. For more than 75 years, St. Jordi’s Day, the feast day of St. George, has been celebrated throughout Catalonia on April 23. The date also commemorates Shakespeare and Cervantes, who both died on that date in 1616. According to the tradition, a man gives a rose to a woman, and the woman in return gives him a book. “Everyone does it, not just romantic couples; even bosses give roses to their female employees,” Miralles explains. Legend has it that a dragon terrorized a local village, demanding its children, until St. Jordi slayed the beast and a rose tree sprung from the blood of the dragon.

On April 23 in Barcelona, throngs of people crowd the two main sections of La Rambla (Barcelona’s most famous street) and a part of the Passeig de Gràcia from morning to night, searching for the latest titles and the writers who are signing them, while street vendors hawk roses. Miralles estimates that more than 4 million books are sold in one day, which would be more than in the whole rest of the year. And this year, St. Jordi’s Day falls on the 400th anniversary of the death of Cervantes and Shakespeare.

Miralles himself doesn’t wait for a specific date to give books as gifts. If he finds a favorite, he’ll buy a case and give them to “20 to 50 people” over the next few years. In Love in Lowercase, the main character, Samuel, presents his long-lost love with El Fallo (published in English as The Flaw) by Greek author Antonis Samarakis. It’s a book about friendship—and, unsurprisingly, it is a book that Miralles himself loves.

Carrie Tuhy is a New York writer and a world explorer.

A version of this article appeared in the 01/18/2016 issue of Publishers Weekly under the headline: A Catalan Romance
TOC
ADVERTISEMENT
More from pw