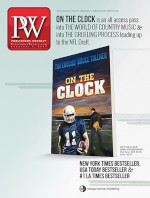 Atria’s Daniella Wexler secured world English rights, in a preempt, to Sadness Is a White Bird, a debut novel by Moriel Rothman-Zecher, a MacDowell fellow, in a deal brokered by Julia Kardon of Mary Evans Inc. According to the publisher, the novel concerns “a young Israeli man trying to reconcile his connection to two Palestinian siblings with his deeply ingrained loyalties to family and country as his military draft date approaches.” In 2015, the author published an op-ed in the New York Times about Israelis who refuse to serve in the nation’s military. Atria plans to publish the novel in spring 2018.

Michael Reynolds, editor-in-chief of Europa Editions, bought world English rights to The Milk Brother by Chantel Acevedo in a deal arranged by Stéphanie Abou of Massie & McQuilkin Literary Agents. According to the publisher, the novel is “based on the true story of the Spanish princess Eulalia, an outspoken firebrand at the Bourbon court during the troubled final years of her family’s reign.” Acevedo, who teaches in the MFA program at the University of Miami, previously published the novel A Distant Marvel with Europa in 2015. The Milk Brother is set to be published in fall 2017.

Journalist’s Book on Truth Under Trump to Prometheus

In a deal negotiated by Karen Gantz of Karen Gantz Literary Management, Steven Mitchell of Prometheus Books acquired world rights to USA Today journalist Nathan Bomey’s second book, tentatively titled The Post-Fact Era: How Truth Died in the Trumpian Age. According to Gantz, the book “explores how the erosion of truth as a pillar of community laid the groundwork for Trump’s rise to power.” Specifically, Bomey will examine how “social media, shifting news habits, the spread of entrenched ideologies, and the failures of educators fueled society’s increasingly tenuous commitment to the facts.” Bomey, a business journalist, previously published Detroit Resurrected: To Bankruptcy and Back with Norton in 2016. The Post-Fact Era is set to be published sometime in 2018.

Caroline Sutton, editor-in-chief at Avery, bought world rights to Trump on the Couch by Justin A. Frank, a psychoanalyst, in a deal brokered by Gail Ross and Katie Zanecchia of Ross Yoon, a Washington, D.C., agency. The book is the third such work by Frank: he previously published Bush on the Couch and Obama on the Couch. The new book, according to the publisher, “builds on three decades of the author’s practice and teaching of psychoanalysis to create an insightful and entertaining psychological profile of Trump and a deeper understanding of his supporters.” Avery plans to publish the book in spring 2018.

In a six-figure, two-book deal negotiated by Rosemary Stimola of Stimola Literary Studio, Kate Farrell of Henry Holt purchased North American rights to Dance of Thieves, a young adult novel by Mary E. Pearson that is set in the universe of her Remnant Chronicles series. According to Stimola, the book centers on a “reformed thief” who is “sent by the Queen of Venda to investigate a disturbance in a distant land.” There, she “finds herself matching wits with the leader of an outlaw dynasty as she tries to uncover the dangerous secret his family hides.” Holt, which has published the previous Remnant titles, plans to release the new novel in spring 2018.

CORRECTION: This article originally misprinted the title of Acevedo's A Distant Marvel.

A version of this article appeared in the 02/06/2017 issue of Publishers Weekly under the headline: Deals
TOC
ADVERTISEMENT
More from pw