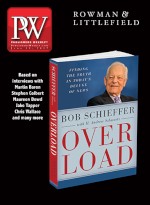 ALA leadership may be in transition ahead of the 2017 ALA Annual Conference, but some things never change. Authors and books remain the lifeblood the show, and this year's event features a typically robust program.

It begins with the Opening General Session on Friday, June 23 (4–5:15 p.m. in the McCormick Place auditorium), which will feature a keynote by Reshma Saujani, founder and CEO of the national nonprofit Girls Who Code and author of the forthcoming Girls Who Code: Learn to Code and Change the World (Viking), which aims to show girls age 10 and older how coding skills are relevant to their lives, and inspire them to create their own apps, games, and robots.

Since 2012, the Girls Who Code movement has taught computing skills to more than 10,000 girls across America, with a goal of reaching one million young women by 2020. The talk is timely: in 2016, ALA and Google launched Ready to Code, an initiative aimed at expanding coding skills in U.S. libraries and librarianship, and a big announcement regarding the program is expected during the conference.

Award-winning author, cartoonist, and educator Gene Luen Yang kicks off the Auditorium Speaker Series on Saturday (June 24, 8:30–9:30 a.m.). In his role as the Library of Congress’s National Ambassador for Young People’s Literature, Yang will focus on his program Reading Without Walls, which aims to teach kids and teens (as well as adults invested in young people’s literacy) about the importance of reading books about characters who may not look like them or topics they don’t know much about.

Also on Saturday (10:30–11:30 a.m), Sandra Uwiringiyimana, author of the memoir How Dare the Sun Rise: Memoirs of a War Child (HarperCollins), will share the story of her survival, her new life in the U.S., and of the horrors that still plague her homeland, the Democratic Republic of the Congo.

When she was just 10 years old, Uwiringiyimana found herself with a rebel soldier’s gun to her head, having already watched her mother and six-year-old sibling be killed. Remarkably, she was spared, escaped, and since her family’s resettlement to the United States in 2007 has fought to raise awareness of human rights abuses in the region.

Closing out Saturday’s main stage program, Sarah Jessica Parker will join Todaro for the ALA President’s Program (3:30–4:30 p.m.) to celebrate the official launch of ALA’s Book Club Central. Created in partnership with Booklist and United for Libraries, Book Club Central is an online platform of reading resources, including recommendations, book lists, and other content for book clubs and their readers. Parker, who will serve as the initiative’s honorary chair, will unveil her first title selection and introduce a guest author, who will join her on stage. A book signing by the Book Club Central–selected author will immediately follow the program. Last October, Parker launched a new fiction line, SJP, for Hogarth, with Molly Stern at Crown.

Brené Brown will open the main program on Sunday, June 25 (8:30–9:30 a.m.). The bestselling author (The Gifts of Imperfection, Daring Greatly, Rising Strong) and founder and CEO of Courageworks, an online learning platform that offers classes for individuals and families on how to pursue their goals with courage, promises to inspire librarians and help them face their own challenges. Important stuff given the array of issues facing libraries in the age of Trump.

Closing out Sunday’s main stage program, don’t throw away your shot to hear the great Ron Chernow (3–4:30 p.m.) keynote the ALA’s annual awards program. The Pulitzer Prize–winning historian and author’s masterful biography of Alexander Hamilton inspired the smash Broadway musical Hamilton, on which Chernow worked as historical consultant. His biography of Ulysses Grant, Grant, will be published this fall by Penguin Random House.

The bad news for Monday, June 26, is that Bill Nye the Science Guy had to cancel due to a conflict. But fear not, science fans. The United for Libraries President’s Program (8:30–9:30 a.m) will feature Andy Weir. Weir was a successful software engineer until the runaway success of his debut novel, The Martian, turned him into a full-time author and screenwriter. Weir will introduce his new book, Artemis (Crown), due out this fall. A book signing will follow the program.

And here’s a great reason to stick around to the bitter end of this year’s conference on Tuesday, June 27: the Closing General Session (10–11:30 a.m.) will feature Hillary Rodham Clinton. Her long political and public service career aside, Clinton is also a bestselling author, with books including two memoirs Hard Choices and Living History, and a popular children’s book, It Takes a Village. In September, Simon & Schuster is scheduled to publish her latest book, at press time still untitled, but which no doubt will offer her take on the brutal 2016 election. “When this opportunity was brought to me, I was thrilled,” says Todaro about sharing her closing moments as ALA president with Clinton. “When people say to me, ‘But isn’t this is politics?’ my reply is, ‘No, this is history.’ ”

As always, a highlight of any ALA is the exhibit floor, which features hundreds of publishers and vendors, as well as multiple pavilions and stages where there will be more author appearances (check the ALA program online for the full schedule). The exhibits will open with a ceremonial ribbon-cutting immediately after the Opening General Session on Friday, June 23, at 5:30 p.m., followed by a reception that includes food, drink, and entertainment.

In addition to the main speaker program and appearances in the exhibit hall, the conference features a number of special events. Please note: some of these events require tickets, including the reception for the Carnegie Medals for Excellence in Fiction and Nonfiction.

This year’s event, cosponsored by Booklist and the ALA’s Reference and User Services Association will feature Sara Peretsky as featured speaker, and speeches from the winners, Colson Whitehead, and Matthew Desmond. The reception is set for Saturday, June 24, 8–10 p.m. at the Hilton Chicago. Tickets are $40 ($30 for RUSA members) and are available via the ALA annual conference web site.

The 48th annual Coretta Scott King Book Awards Breakfast (7–9:30 a.m.) is set for Sunday, June 25. Presented by the ALA Ethnic and Multicultural Information Exchange Round Table, the breakfast honors the year’s best African-American authors and illustrators of books for children and youth. Among those honored at this year’s celebration will be Coretta Scott King Author Award–winners Rep. John Lewis and Andrew Aydin, authors of March: Book Three (Top Shelf).

As always, check your program for changes. And please visit Publishers Weekly at booth 2420 on the show floor. We look forward to seeing you in Chicago!