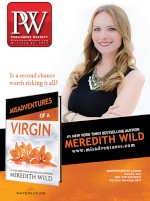 When a Librarian Travels...

PW library columnist Sari Feldman reflects on one of her favorite bookstores: the Bookworm Bookshop & Cafe in Thurles, Ireland

When librarians travel, we always carry at least two books: the book we are currently reading and at least one backup (in case we don’t like the first book, or like it so much that we finish it too quickly). And we almost always seek out a local library, bookstore, or other sort of literary haunt.

When I travel, I especially love to pop into bookstores to observe the retail marketplace for books. What does the shop’s proprietor do to handsell? How are the displays working to entice customers?

A trip to Portugal early this summer led me to the famous Livraria Lello Bookshop in Porto. Its stunning interior alone makes it worth a visit for any bibliophile. But it has developed quite a following for another reason: it’s known to have inspired the library at Hogwarts, that magical spot where Harry Potter fans have surely dwelled in their own imaginations. J.K. Rowling lived in Porto teaching English in the 1990s and is said to have been a regular at the bookstore. Today, people line up well before the store opens for the day, and Livraria Lello charges an entrance fee for the experience of roaming among its carved wooden bookcases and wandering up the steep staircase, although if a visitor makes a purchase the fee is deducted from the price.

Attaching a renowned celebrity writer to the store and charging an entrance fee is certainly one way to insure the sustainability of a bookstore in today’s market. Of course, few bookstores have that advantage.

One of my favorite travel stops is the Bookworm Bookshop & Café in the small town of Thurles in County Tipperary, Ireland. Opened in 1993 by owner John Butler, the Bookworm started its life in a tiny space as a risky proposition.

“First, I was out of a job!” says Butler, when asked why he decided to open a bookshop. “Not necessarily a good reason to open a bookshop, but I felt I could do something myself, as the jobs market at the time was fairly bleak. Secondly, and more important from the bookstore point of view, there was no bookstore in Thurles at the time.”

Butler had no experience in the book business when he opened the store—just a love of books and reading. “There were always books at home,” he says, “and all the family were good readers.” He also knew a bit about retail from his family background. “So I managed to find a premises, and I sourced all the shelving I needed from a bookstore in University College Cork, which was closing. My capital outlay was not huge, so I knew if it didn’t work out I wouldn’t be in huge debt.”

Luckily, things have worked out so far. Next year will mark the store’s 25th anniversary. But unlike the Livraria Lello Bookshop in Porto, which can count on a line of tourists, the greatest challenge for Butler—like many independent booksellers—is getting people in the door. “The book trade has changed beyond recognition over the past decade, with Amazon, e-books, smartphones, tablets, and social media fundamentally changing the way people learn about new books, make their buying decisions, and subsequently purchase,” he says. And then of course, there was the recession.

Concerned about survival during the economic downturn a few years back, Butler says he began to rethink the overall customer experience at the Bookworm: “The café was the first major addition to the shop. We had some space to the rear with a nice skylight, so we decided to give it a shot.” Once again, he was able to source the necessary equipment and furniture inexpensively, from a café in Cork that was closing, and he started serving coffee with books at the end of 2009.

Over the years, a music area has also grown in the shop. “It started with smaller items like guitar strings, tin whistles, and bodhráns and gradually developed and expanded to include guitars, banjos, and fiddles, Butler explains. “Music is very strong locally, particularly in the schools, so there is a market for what we stock.” Today, as part of its programming calendar, the shop hosts guitar and tin whistle lessons, small gigs by bands, and weekly craft circles and Irish-language coffee gatherings, in addition to book launches and author events.

Ireland has always had a strong relationship with its writers and readers, and one way the Irish express the value they place on books and reading is by charging zero VAT (value-added tax) on books. (The VAT in Ireland is about 23%.) And even though the European Union has attempted to influence Ireland to place VAT on books, the Irish Booksellers Association has taken a very strong stance against the idea.

For booksellers like Butler, the store is a labor of love, and it is a valued part of the community in Thurles. But concern about the future of his business remains.

“The retail scene, especially in small towns like ours, is going to change further over the next few years,” Butler says. “And it will be all about the shopping experience.”

What Can We Learn?

I happen to love the Bookworm. And that’s because, aside from the fact that it’s the best cup of coffee in Thurles, over the 20-plus years I have been visiting the store, Butler has taken the time to know me. He even created for me the ultimate “bookcart.” You see, my husband is a native Irishman. And Butler helped me to better understand the Irish by introducing me to writers such as Colm Tóibín, and even shipping me a copy of Down All the Days, a novel by Christy Brown (better known for his autobiography, My Left Foot).

For me, the Bookworm has made it easy to bring Irish culture back home. There were always fairy tales for our kids and songbooks for my husband. But it is the whole experience that stays with me. The fact that Butler really took the time to understand me as a reader, and pays attention every time I visit, is what keeps me coming back and spending money in the store. And his suggestions have been spot-on: he introduced me to Ian MacEwan’s Atonement and Isabel Allende’s The House of the Spirits, which rank high among my favorite books.

A version of this article appeared in the 10/16/2017 issue of Publishers Weekly under the headline: When a Librarian Travels...
TOC
ADVERTISEMENT
More from pw